Kids Encyclopedia Facts
"Reddy Bays" redirects here. It is not to be confused with Beddy Rays.

Redland Bay is a coastal semi-rural locality in the City of Redland, Queensland, Australia. In the 2016 census Redland Bay had a population of 14,958 people.

Since the first European settlers arrived in the mid-19th century, Redland Bay has remained a farming and fishing-based area until the mid-20th century when some of the farms were subdivided and improved transport infrastructure made it possible for residents to commute the 35 kilometers into Brisbane. 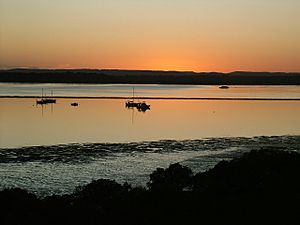 The median age of the Redland Bay population was 37 years, the same as the national median.

In the 1860s, settlers from England, Germany and Scandinavia began filtering into and along the Logan River and surrounding districts. They found dense forests growing from generally good soil. Particularly rich was the soil of the Redland Bay District which is said to have had lush rainforest complete with prized red cedar.

The labour of clearing the forest was long and arduous. One man with an axe might labour for years to clear an area of land that could support a viable farm. The felled timber would then milled to provide building material for the first houses. Locally milled cedar was used for doors, architraves and other feature work on the early houses, such as the original farmhouse on what was to become Mt Carmel Orchard. The character of the red soil was such that over time, it infiltrated itself into and on farm buildings, giving them a characteristic red tinge.

One early settler was Arnold Friedrich Muller who took up 50 acres (200,000 m2) of coastal forest north of what is now Point Talburpin. Muller's farmhouse was removed in the 1990s to make way for a stage of the Orchard Beach estate, but its site is still marked by a pair of mature fig trees, planted around 1905, at the top of School of Arts road where it meets Collins Street. While these trees were likely to have been planted for the practical purposes of shading the house from the intense afternoon sun and cold winter westerly winds, they also stand as a symbol of the enduring husband and wife farming partnerships that helped to define the character of Redland Bay.

The early farms produced sugar cane, pineapples and citrus. The produce was taken to market by horse-drawn wagon at first, then by the steamboats Pearl, Eucalypta, Louisa and Porpoise, operated by one Captain John Burke.

The viability of these crops was reduced as larger farms to the north at Thorneside, Cleveland and Ormiston gained a competitive advantage over Redland Bay, possibly due to access to rail transport. Redland Bay farmers moved towards producing tomatoes, cabbage, cauliflower and passionfruit. These crops continued until farming finally gave way to suburban development around the year 2000.

From 2000, Redland Bay has been increasingly populated. Most farms have been replaced by housing, and has its own set of shops. It is relatively close to Victoria Point, and is only a ferry ride away from the bay islands, such as Russell and Macleay.

Redland Bay has a number of heritage-listed sites, including:

Redland Bay was the closest suitable site to Brisbane for a water airport. Since it operated international flights, Brisbane Water Airport at Redland Bay became Brisbane's International Airport for a time.

Pre-1946, flying boats used the Hamilton Reach of the Brisbane River. The State and Federal Governments argued for several years over the continued use of the Hamilton Reach, which was congested with shipping and unusable after dark.

Activity at Redland Bay reached its peak in the 1950s with 105 commercial flying boat movements in July 1953. There was a steady decline after that until the base was finally closed in 1971. After 1971, Qantas began operating the new Boeing 747 long-haul aircraft that made the Flying Boats obsolete.

The terminal for the Flying Boat Base was at Banana Street, Redland Bay, near the present location of the Bay Island ferry service. Flying boat passengers waiting to embark, and those in transit could wait and be refreshed at the Redland Bay Hotel while the Flying Boats were serviced for the onward journey.

The flying boat would leave Rose Bay in Sydney at 7:30pm and arrive at Redland Bay at around 11:00pm. Two hours later, she was back in the air, en route to Nouméa in New Caledonia, where passengers would go ashore for breakfast. Several days, and many stops later, the flying boat would arrive in London. By contrast, in 2009, travelling on a long-haul 747, passengers can fly direct from Brisbane to London via Singapore in less than 24 hours for a mere fraction of the cost.

The arrival of the flying boat in Redland Bay near midnight did not go unnoticed by the local residents. A powerful searchlight swept the watery runway to guide the pilot. Launches carrying passengers, luggage, fuel, freight, refreshments and mail made their way to and from the moored flying boat. Voices carried clearly across the calm water.

The Qantas service to Nouméa flying boat came to and end in the mid-fifties, to be replaced by direct flights between Sydney and la Tontouta airport by DC4, DC6b, Lockheed Electra, Boeing 707 and Boeing 747 successively.

All content from Kiddle encyclopedia articles (including the article images and facts) can be freely used under Attribution-ShareAlike license, unless stated otherwise. Cite this article:
Redland Bay, Queensland Facts for Kids. Kiddle Encyclopedia.