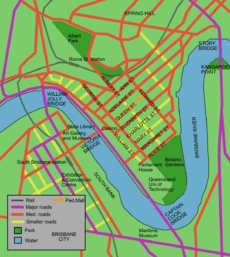 Map of the CBD

The Brisbane central business district (CBD), officially gazetted as the suburb of Brisbane City and colloquially referred to as 'the city', is the heart of the state capital of Queensland, Australia. It is located on a point on the northern bank of the Brisbane River. The triangular shaped area is bounded by the Brisbane River to the east, south and west. The point, known at its tip as Gardens Point, slopes upward to the north-west where the city is bounded by parkland and the inner city suburb of Spring Hill to the north. The CBD is bounded to the north-east by the suburb of Fortitude Valley. To the west the CBD is bounded by Petrie Terrace, which in 2010 was reinstated as a suburb (after being made a locality of Brisbane City in the 1970s). 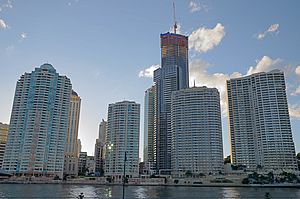 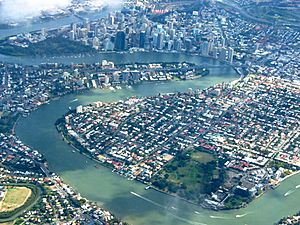 Aerial view of the central business district (top) from the east.

The Brisbane central business district is an area of densely concentrated skyscrapers and other buildings, interspersed by several parks such as Roma Street Parklands, City Botanic Gardens and Wickham Park. It occupies an area of 1.367 km². The City is laid out according to a grid pattern surveyed during the city's early colonial days, a feature typical of most Australian street patterns. As a general rule, the streets aligned northwest-south east are named after male members of the House of Hanover, while the northeast-south west aligned streets are named after female members. Queen Street was the central roadway, that was turned into a pedestrian mall. It forms the pivotal axis for the grid of roads within the district.

The Brisbane central business district was built on a spur of the Taylor Range with the highest spot in the suburb being Wickham Terrace. North Quay is an area in the CBD that was a landing point during the first European exploration of the Brisbane River.

Petrie Bight is a reach of the Brisbane River (27°27′49″S 153°02′06″E﻿ / ﻿27.4636°S 153.0351°E﻿ / -27.4636; 153.0351﻿ (Petrie Bight)), which gives its name to the small pocket of land centred on the area under the Story Bridge's northern point, around the Brisbane River to Admiralty Towers II. The location was originally known as Petrie Gardens and was an early settlement farm, one of two that provided food for the colony. The site was named after Andrew Petrie and has been the base for water police and in earlier times wharves. The location of Customs House and the preference for wharves was due to site being directly downstream from the central business district. 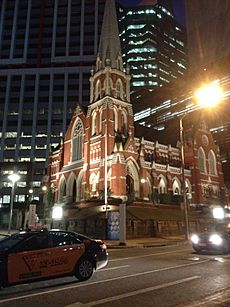 Up until 1964, a Brisbane City Council regulation limited building heights to 132 ft (40 m). Some of the first skyscrapers built in the CBD include the SGIO building (now Suncorp Plaza) in 1970 and AMP Place in 1977.

In the last few decades the number of apartment buildings that have been constructed has increased substantially. Brisbane is home to several of Australia's tallest buildings. Brisbane's tallest buildings are Soleil at 243 metres, Aurora Tower at 207 metres, Riparian Plaza at 200 metres, One One One Eagle Street at 195 metres, and Infinity, at 262 metres, which was completed in 2014.

The Brisbane CBD is one of the major business hubs in Australia. The City contains many tall office buildings occupied by organisations, businesses and all three levels of government that have emerged into a number of precincts. The areas around the Queen Street Mall and Adelaide Street is primarily a retail precinct. A legal precinct exists around the various court buildings located around the intersections of George Street and Adelaide and Ann Streets.

The government precinct is an area centred on the Executive Building that includes a many Queensland Government offices. 111 George Street, Mineral House, Education House and the Neville Bonner building in William Street are also located here.

The Brisbane CBD has only one third the number of premium hotel rooms that either Sydney or Melbourne's central business districts have. 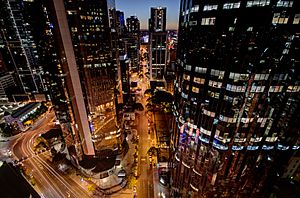 High rise view of the CBD at night.

Like most other Australian capital cities, Brisbane has experienced dramatic rises in rental prices for residential and office space before the global financial crisis. At the beginning of 2008, the Brisbane central business district contained 1.7 million square metres of office space. High demand in the office market had pushed vacancy rates in the Brisbane CBD to 0.7% by January 2008, the lowest in Australia. Premium grade office space was even less vacant with an occupancy rate of 99.9%. By the end of 2009 the situation had reversed. In mid 2013 the market for office space had declined to its worst position in two decades with a vacancy rate of just under 13%. 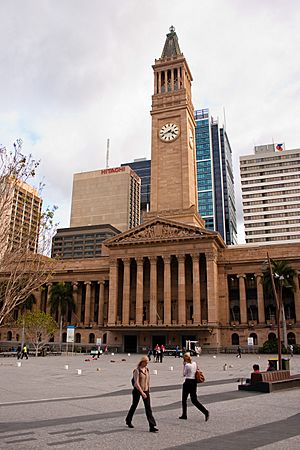 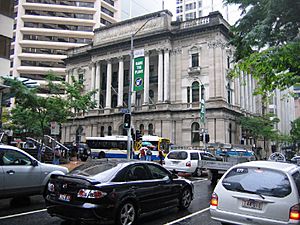 Brisbane has many heritage-listed sites, including:

By road, four road bridges connect the CBD with the southern bank of the Brisbane River: the Captain Cook Bridge, the Victoria Bridge, the William Jolly Bridge and the Go Between Bridge. The Story Bridge connects Fortitude Valley with Kangaroo Point and provides access to the city from the southern bank. The Captain Cook Bridge connects the Pacific Motorway, south of the river, with the Riverside Expressway which runs along the south western edge of the city. Heading under and bypassing the CBD is the Clem Jones Tunnel.

The Brisbane Riverwalk, a pedestrian and cyclist pathway adjoins the central business district along the river bank.

The Brisbane CBD has featured in a number of films, including:

All content from Kiddle encyclopedia articles (including the article images and facts) can be freely used under Attribution-ShareAlike license, unless stated otherwise. Cite this article:
Brisbane central business district Facts for Kids. Kiddle Encyclopedia.