Spring Hill is an inner suburb of Brisbane, Queensland, Australia located 2 kilometres (1.2 mi) north of the central business district. Parts of Spring Hill can be considered to be extensions of the Brisbane CBD. 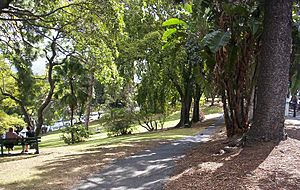 The Old Windmill in Wickham Park was built in 1824 when Brisbane was a penal colony and originally milled grain and then used as a gallows for the colony. The Spring Hill Baths operated by the Brisbane City Council are the oldest public baths in Queensland.

Spring Hill was so named in the nineteenth century because the hill on which the suburb was built was the source of the creek that was Brisbane's first fresh water supply.

Spring Hill is one of the oldest residential neighbourhoods in Brisbane, with many houses dating from the nineteenth century. As an example, some of the house lots in Sedgebrook Street were surveyed in the 1870s. However, in recent decades much of the older residential and commercial structures have been demolished to be replaced by modern office blocks and apartment buildings.

A government laboratory and animal facility was built in the 1890s adjacent to the Brisbane Grammar School on College Rd. It was known as the Bacteriological Institute from 1900 to 1910.

Between 1903 and 1947 trams ran up Edward Street and along Leichhardt Street to Gregory Terrace. This tram line, operated by the Brisbane City Council, was the steepest in Australia, with a maximum gradient of 1 in 8. After its closure the trams were initially replaced with diesel buses, but in 1951 these were replaced by a trolley-bus service. This was in turn replaced by diesel buses in 1968. The Brisbane City Council continues to provide bus services to the suburb.

The suburb was also served by trams along Boundary street and St Pauls Terrace, with this service being replaced by buses in 1969.

The Inner-Northern Busway serves the suburb via the Normanby bus stop.

Spring Hill has a number of heritage-listed sites, including:

All content from Kiddle encyclopedia articles (including the article images and facts) can be freely used under Attribution-ShareAlike license, unless stated otherwise. Cite this article:
Spring Hill, Queensland Facts for Kids. Kiddle Encyclopedia.