West End is an inner southern suburb in the City of Brisbane, Queensland, Australia. In the 2016 census, West End had a population of 9,474 people.

The Aboriginal name for the area is Kurilpa, which means place of the water rat.

West End was named by early English settlers who found the area reminiscent of the West End of London.

West End was one of the first suburbs of Brisbane to be serviced by a tram line, being opened in 1885. Initially the tram was horse-drawn and terminated in Boundary Street, but in 1897 the line was electrified and extended to the southern end of Hardgrave Road, via Vulture Street. It was subsequently extended down Hoogley Street to the ferry terminus at the end of Hoogley Street. The tram line closed on 13 April 1969. The Dornoch Terrace Bridge was completed in 1941.

The former Tristram's Drink Factory, 79 Boundary St, West End, built in 1928 and one of Australia's best examples of the Mission Revival Style architecture was converted into a market in the 1990s and remains a heritage landmark of West End.

Scenes for the feature film Jucy (2010) were shot at the now-defunct video store Trash Video in the suburb.

The suburb was affected by the 2010–2011 Queensland floods as the Brisbane River broke its banks. From 11 January low-lying areas of the suburb and other places in Brisbane were evacuated. 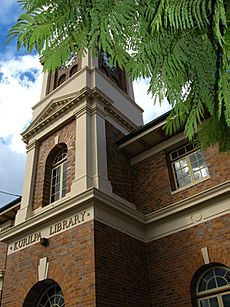 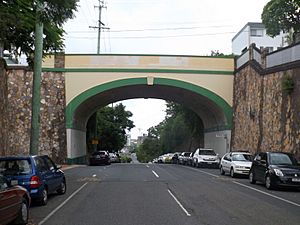 West End has a number of heritage-listed sites, including:

West End is adjacent to the suburbs of South Brisbane and Highgate Hill. These three suburbs make up a peninsula of the Brisbane River.

The Aboriginal name for the area is Kurilpa, which means place of the water rat.

The suburb has traditionally been home to Brisbane's largest Greek community, with an estimated 75% of Brisbane's Greek population living in West End by 1980. The most common ancestries in West End are English 20.6%, Australian 16.8%, Irish 10.1%, Scottish 8.0% and Greek 5.2%. Indigenous Australians make up 1.5% of the population of West End. For this reason, West End has often been cited as one of Brisbane's most successful multicultural areas.

Just over 50% of the dwellings are standalone houses and 37% are higher density residential properties, including multi-storey blocks of apartments and units. Some houses are covered by historic preservation laws seeking to preserve the historical character e.g. tin roofing. Contrasting sharply with the historic homes are new buildings of contemporary designs. Prices for all types of properties have been increasing dramatically in recent decades. According to REIQ, the median unit/town-house price in West End for 2005 is $310,000, and the median house price is $490,500.

A flood flag map for West End can be found at the Brisbane City Council website.

In May 2012, it was announced that the South Brisbane Riverside Neighbourhood Plan would be resubmitted to allow the construction of 12 storey buildings, considerably higher than the previous seven storey limit. According to the Brisbane City Council's Neighbourhood Planning chairwoman, Amanda Cooper, there are six sites located between Montague Road and the Brisbane River, south of Davies Park, which are at least one-hectare in area, a requirement for construction of the increased building heights. 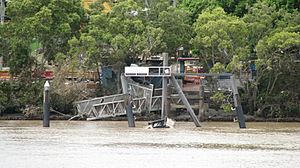 CityCat services leave from the West End ferry wharf in Orleigh Street. The ferry terminal was destroyed in the 2011 floods. It was replaced and operating on 24 July 2011. 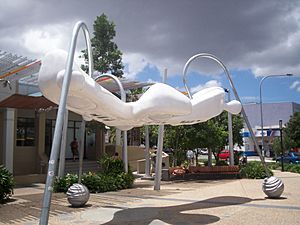 West End has a number of galleries and Artist-run initiative which showcase the works of local artists. The neighbouring suburb of South Brisbane, the designated cultural precinct of Brisbane, is home to some of Queensland's most well-regarded cultural education institutions, such as the Queensland College of Art, the Queensland Conservatorium Griffith University, Queensland Performing Arts Centre. However, as Southbank is primarily commercial, many Artists and Students live in the much larger and residential West End. 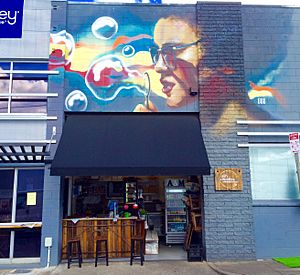 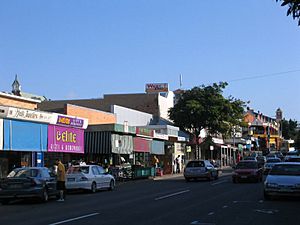 The area's major attraction is its café and restaurant scene, as well as its shopping, which is centred along Boundary Street. It is also known for its high concentration of ethnic and organic grocery stores. Davies Park on the riverside hosts one of the largest farmer's markets in Greater Brisbane every Saturday called the Green Flea Markets. Weekend 'brunch' culture is prevalent in West End, with numerous cafes and restaurants serving the area.

West End has an industrial backbone, in particular, along Montague Road down to Riverside Drive. Given the value of riverside property now that flooding is better managed, factories are now being sold to make way for upscale waterfront apartments. This is part of a plan to increase population densities in near-city suburbs. It will significantly affect the ability of working-class people to remain in the area and change the economic make-up of the area. As such, West End is currently undergoing urban renewal, with a large change in real estate prices, and new development changing the area demographic.

Queensland Cup rugby league team, the Souths Logan Magpies, play their home games at Davies Park, West End (Bill Tyquin Oval). Prior to 2003, it was the famous Souths Magpies who graced the hallowed Davies Park field and legendary players such as Mal Meninga, Gary Belcher, Peter Jackson, Mick Veivers, Greg Veivers, Harold 'Mick' Crocker, Frank Drake, Mitch Brennan, Bob Linder, Ash Lumby, Norm Carr, Richo Hill and Chris Phelan wore the black and white of the club. Current ARLC Chief John Grant was another ex-Souths player, representing Australia from the club, while legendary rugby league coach Wayne Bennett was a premiership-winning mentor with the Magpies in the mid-1980s. During the 1970s and 1980s, the Magpies were an institution in West End and their 1981 and 1985 Brisbane Rugby League grand final victories transformed the suburb into a party town.

Along the river bank of Milton Reach can be found the rowing sheds of a number of Brisbane secondary schools such as Brisbane Grammar School and Brisbane State High School, as well as rowing clubs. Amongst these is the Commercial Rowing club. It was established in 1877 and is Queensland's oldest amateur sporting club.

The South Brisbane Sailing Club has its club house near Orleigh Park. The club was established in 1903 and has been located in West End since 1956.

In 2017 plans to expand the school's site were announced following a purchase of an adjacent block of land.

There is no secondary school in West End. The nearest secondary school is Brisbane State High School in neighbouring South Brisbane to the east. This school is known for its academic excellence and demand for places outstrips supply. However students within its local catchment area are always able to attend this school, which drives up the price of real estate in suburbs within the catchment like West End as parents seek to buy or rent within the catchment to obtain enrolment in the school.

All content from Kiddle encyclopedia articles (including the article images and facts) can be freely used under Attribution-ShareAlike license, unless stated otherwise. Cite this article:
West End, Queensland Facts for Kids. Kiddle Encyclopedia.