St Lucia is a riverside suburb in the City of Brisbane, Queensland, Australia. In the 2016 census St Lucia had a population of 12,574 people. The University of Queensland is the main attraction of St Lucia, with the university, and residential colleges covering a large proportion of the suburb. 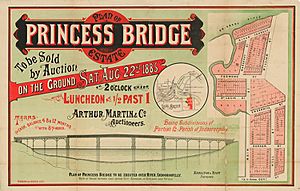 The area was originally part of Indooroopilly and later part of Toowong. Originally known as Indooroopilly Pocket, for a short time it was called Toowong South and part of the area was hived off as Lang Farm. Sugar plantations were established in the area in the 1860s. William Alexander Wilson, born in St Lucia in the West Indies, purchased the Coldridge Plantation in 1882 and renamed it St Lucia Sugar Plantation. It was subdivided in 1883 for housing and the name was transferred to the subdivision.

St Lucia is a green, leafy suburb with a variety of housing including apartment complexes and detached Federation styles and Queenslanders. 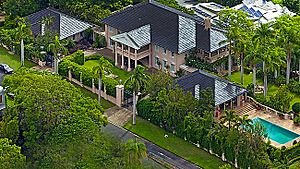 St Lucia has a number of heritage-listed sites, including:

Although never heritage-listed, one of St Lucia's most iconic homes was once the so-called The Pink Palace at 272 Swann Rd until it was demolished in 2015.

St Lucia is home to a diverse range of people and families. Typically, the student population of St Lucia is high, especially in dwellings in the immediate vicinity of the university, but the suburb is also home to wealthy professionals and families.

In St Lucia, just over half of all households (50.1%) were family households, 21.7% were single person households and 28.3% were group households. The median weekly household income was $1,385, similar to the national median of $1,438.

The University of Queensland is the main attraction of St Lucia, with the university, and residential colleges covering a large proportion of the suburb. Ironside State School which was opened in 1870 is located on Hawken Drive and is the only primary school in the suburb. Several small shopping precincts are located throughout the suburb but otherwise the suburb is residential. St Lucia Golf Links is an 18-hole pay-and-play public golf course located on the corner of Indooroopilly Road and Carawa Street, St Lucia. The golf course is one of Brisbane's oldest and has hosted several Queensland Open and PGA tournaments. The layout suits golfers of all levels. 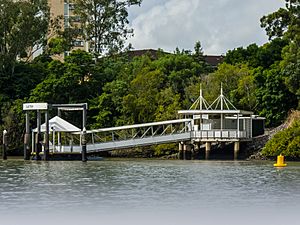 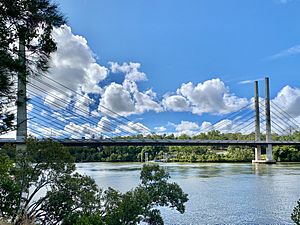 By Bus, St Lucia can be accessed from the western suburbs and Brisbane CBD, with routes terminating at the University of Queensland. There is also a NightLink service, a safety initiative which provides buses with security on board all night Fridays and Saturdays. The Eleanor Schonell Bridge, a dedicated bus/pedestrian/bicycle bridge, connects the University with Dutton Park and carries buses from the southern suburbs, CBD and Royal Brisbane Hospital to the Lakes Bus Station on St Lucia campus.

By Ferry, The CityCat stops at two terminals in St Lucia, the Guyatt Park CityCat Terminal and University of Queensland Terminal.

By Bicycle, St Lucia has bicycle routes that utilise the residential streets between the University of Queensland and Toowong.

By Road, St Lucia has three major thoroughfares which all lead to the University of Queensland. These are Swann Road, Sir Fred Schonell Drive and The Esplanade. 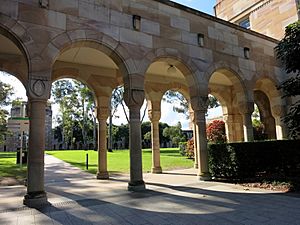 There are several high schools close to St Lucia, although there is no secondary school in St Lucia. The nearest secondary schools are Indooroopilly State High School, St Peters Lutheran college, Brisbane Boys College and the Queensland Academy of Science, Mathematics and Technology (QAMST).

All content from Kiddle encyclopedia articles (including the article images and facts) can be freely used under Attribution-ShareAlike license, unless stated otherwise. Cite this article:
St Lucia, Queensland Facts for Kids. Kiddle Encyclopedia.