Kids Encyclopedia Facts
This page is about a suburb of Brisbane, Australia. For the virtual community, see Taringa!. For the marine gastropod, see Taringa (gastropod).

Taringa is a suburb of Brisbane, Australia 5 kilometres (3.1 mi) south-west of the Brisbane CBD. Taringa is mostly residential, except for a small number of commercial buildings mostly clustered along Moggill Road. It is a popular neighbourhood among the students of the University of Queensland and the Queensland University of Technology because of its proximity to the universities and to Brisbane city.

Taringa is dominated by a ridge that runs the length of Swann Road, with steep slopes on either side of the ridge.

The suburb name 'Taringa' is a combination of two Aboriginal words: tarau (stones) and nga (made up of). Together, they mean "place of stones".

The Lionel Brand of Worcestershire sauce was manufactured in Taringa. 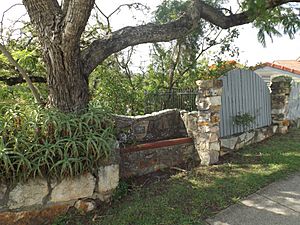 Taringa has a number of heritage-listed sites, including:

The Taringa Scout Den is the home of the Taringa-Milton-Toowong Scout Group. It is also used as a GoJu Karate training facility and for Yoga. 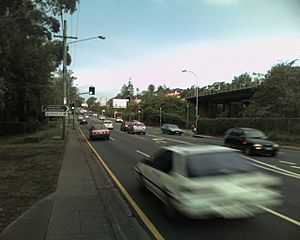 By Train, Taringa Station is part of the Queensland Rail City network, on the Ipswich and Rosewood railway line providing travel to the Brisbane CBD and Ipswich

All content from Kiddle encyclopedia articles (including the article images and facts) can be freely used under Attribution-ShareAlike license, unless stated otherwise. Cite this article:
Taringa, Queensland Facts for Kids. Kiddle Encyclopedia.