Kids Encyclopedia Facts
Not to be confused with Towong, Victoria.

Toowong is a riverside suburb in the City of Brisbane, Queensland, Australia. In the 2016 census, Toowong had a population of 10,830 people.

Toowong is situated between Mount Coot-tha and the Brisbane River and is made up of rolling hills with little flat land. Since European Settlement most of the land has been cleared for residential and commercial use with the exception of some park land and bushland near the Western Freeway.

The Brisbane General Cemetery, started in 1866 and formally opened in 1875, is Queensland’s largest cemetery, placed on 437,300 square metres of land. It replaced Brisbane’s first cemetery which was located near Skew Street in the centre of Brisbane. The cemetery, now called Toowong Cemetery, contains a signposted walk that provides information on various people buried therein.

Brisbane Boys' College is a day boarding school established in Clayfield in 1901. In the late twenties it was decided that there were insufficient facilities at the Clayfield location, and the school was moved to Toowong on Kensington Terrace. 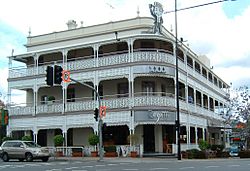 Toowong has two main drinking establishments, the Regatta Hotel and the Royal Exchange Hotel, both of which are historic hotels. The three storey Regatta hotel contained accommodation on the upper two floors and a public bar and lounge area on the ground floor. In 1965 a protest took place in the public bar of the Regatta Hotel when Merle Thornton (mother of Australian actress Sigrid Thornton) and another woman chained themselves to the bar in protest of public bars in Queensland being restricted to men only. 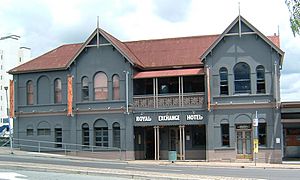 Located on Sylvan Road, Toowong Memorial Park is a large park with gum trees, football ovals and a commanding view of the suburb. It was officially opened in 1918 in honour of those who enlisted from the Town of Toowong during the World War I. The park contains the Soldiers' Memorial on top of the hill was dedicated in 1922 and an RSL memorial is located near the Memorial gates on Sylvan Road, and also contains the Western Districts Rugby Football Club and a Basketball centre. Anzac Park is located next to the Western Freeway opposite the Toowong Cemetery. Originally the land was part of the cemetery grounds, but was converted to a rifle range in 1877. At the end of World War I the trees were planted in memory of the men from Toowong. The park land was proposed as a site for the Botanic Gardens, but the construction of the Western Freeway forced the move of the proposed site to its current location closer to Mount Coot-tha. The Mount Coot-tha Botanic Gardens and the Sir Thomas Brisbane Planetarium are located at the base of Mount Coot-tha.

The Toowong pool was a 25-yard (23 metres) pool with timber grandstands and dressing sheds, originally built in the 1920s. The facilities were reconstructed and re-opened in 1959, to commemorate Queensland's centenary. These later works were designed by James Birrell, Brisbane City Chief Architect. The pool was demolished in 2003 to make way for the development of an office tower on the site.

The Toowong Municipal Library Building was built 1961 on Coronation Drive opposite the Toowong pool, and was formerly the district library for the western suburbs. The library was also designed by Brisbane City Chief Architect James Birrell, and is one of the few remaining examples of his work. The library is now used as commercial premises. The building comprises a two storey library surrounded by trees and landscaped terraces, with cavity brick lower floor, the structure is formed by three intersecting circles. Above this base floor is a ‘floating’ crystalline form with 12 sided polygon (dodecagon) floor plan whose external walls taper outward as they rise and which houses the principal public floor of the library. The external steel wall framing of the upper floor is diagonally braced, and sheeted with plywood panels set within the structural framing and framed with silky oak beading. The library originally had a hemi-spherical skylight above its centre, which has now been replaced by an enclosure for mechanical equipment.

The library was threatened for closure in 1982 following the opening of a new municipal library at Indooroopilly in 1981. The Toowong Library did in fact close but local residents’ action saw it re-opened in 1983. Alterations were made to the building in 1983 when one of the rooms on the lower floor was acquired for use by the local councillor as a ward office, until 2005. Despite a campaign by local residents to prevent the closure of the library and redevelopment of the library and adjoining swimming pool site, the library was moved to Toowong Village shopping centre in March 2001, and the original building, which is protected by heritage listing, is now business premises.

The workshops and a bus depot of Brisbane Transport is located at the western end of the suburb. 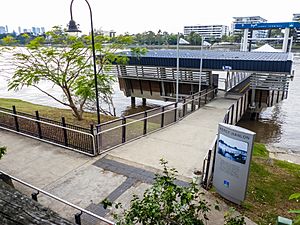 Toowong is a major transport node, with almost all bus and train routes passing through Toowong from the western suburbs.

By Train, The Toowong train station on the Ipswich Line is located under Toowong Village.

By Bus, Buses travel along Coronation Drive from the city stopping on Benson Street and then on towards the University of Queensland, or stop on High Street outside the Royal Exchange Hotel and continue towards Indooroopilly and other western suburbs.

By Road, Toowong is accessed by Coronation Drive and Milton Road from the north, and by Moggill Road and the Western Freeway to the south and west. The main roads inside Toowong are High Street and Sherwood road.

By Bicycle, Toowong two main bicycle paths, one that starts at Coronation Drive and proceed towards the University of Queensland and the second that again starts from Coronation Drive but runs to and along the Western Freeway.

The West Toowong Community Association was formed in 1999 by a group of residents concerned about what they saw as increasing inappropriate development in the area. The group soon branched out to protect and develop community activities in the suburb. It has run several campaigns about development in the area including an unsuccessful attempt to prevent the demolition of the James Birrel designed Toowong Pool, and a successful campaign to prevent the construction of a mobile phone relay station tower within a residential area of West Toowong. It was also instrumental in successfully lobbying for the construction of a safe crossing over the Western Freeway at Toowong, which was hotly opposed by other Toowong's residents and prompted the creation of opposing associations. The overpass was eventually successfully built, providing safe access from Anzac Park to footpaths and cycle paths leading to Mt Cootha and other recreational areas.

The Vera Street Community Garden was formed in 2005 and operates as a community vegetable growing and creek rehabilitation group. Open to members of the public, it is located within the grounds of the Queensland Academy for Science, Mathematics and Technology (entrance via Vera St). This public garden is located on state government land, the former site of a Chinese market garden.

Western Group of the Brisbane City Unit of the Queensland State Emergency Service has its headquarters at Perrin Park in Josling St. This site is shared with the Brisbane City Council Parks & Trees and the Toowong Community Meeting Place.

Toowong is home to one of the first four Scout troops in to be founded in Queensland in 1908. One hundred years on and Toowong has since merged with Milton & Taringa Scout troops but celebrates its 100 years as the oldest Scout troop in Queensland. Taring-Milton-Toowong Scout Troop is also known for their annual Scout rally which is one of the longest running Scout rallies in the world.

In 1861 the McDougall pastoral lease, which extended to Moggill, was broken up and sold. Several early settlers subdivided their blocks, including Richard Drew who named his subdivision the 'Village of Toowong' in 1865. Toowong started developing with the arrival of the Ipswich railway line in 1875. It was originally suburb of detached villas and large yards owned by an elite upper-middle class that worked in the city and socialised with each other. As access to the suburb improved with regular train services the population increased. The Shire of Toowong was created in 1880, in response to a petition from Toowong residents. In 1881 the population numbered 1,275 and seven years later it had almost doubled to 2,230. By 1901 the population numbered around 4,700. 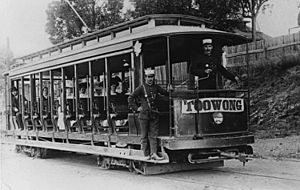 In 1903 the Brisbane Tramways Company built a tram line along Milton Road to service the western side of the suburb. Initially the tram line terminated at the cemetery, but was later extended up Woodstock Road (Formally Dean Street), to the palatial home of the then Manager of the tram company Joseph Stillman Badger. In 1922, along with the rest of Brisbane's tram system, the line was taken over by the government (see Brisbane Transport.) The tram line closed in December 1962, after the disastrous Paddington tram depot fire.

Toowong has been part of a number of different local governments:

Toowong has a number of heritage-listed sites, including:

The Toowong Baths were first constructed as a 25 metres (82 ft) swimming pool in 1909 on Coronation Drive south of Booth Street (27°29′02″S 152°59′40″E﻿ / ﻿27.4838°S 152.9945°E﻿ / -27.4838; 152.9945﻿ (Toowong Swimming Pool)). Originally established by a private company, the baths were acquired in 1920 by the Toowong Town Council. In 1925, the Town of Toowong was amalgamated into the City of Brisbane and the baths come under the control of the Brisbane City Council. In the late 1950s, the buildings associated with the pool were replaced with new iconic buildings designed by Brisbane City Council architect James Birrell. The new Birrell-designed Toowong Library was constructed on Coronation Drive on the northern side of Booth Street. Despite public outcry, the Brisbane City Council sold the pool complex to fund the redevelopment of Toowong Library (which was also controversial) blaming declining patronage of the pool. The Toowong Swimming Pool was demolished on 21 March 2001. An office block now occupies the site.

The West Juniors Australian rules football club has its home ground at Oakman Park in Toowong.

Despite its name. Toowong FC (soccer club) has its home ground at Dunmore Park on the corner Roy and Evans Roads in neighbouring Auchenflower. The club consists of 17 kids teams [Age 4 Up], 3 Senior Women's Teams and 5 Senior Men's Teams. 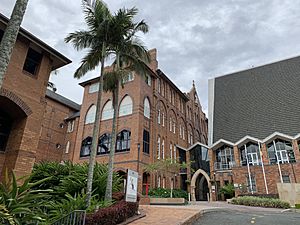 Notable people with connections to Toowong include:

All content from Kiddle encyclopedia articles (including the article images and facts) can be freely used under Attribution-ShareAlike license, unless stated otherwise. Cite this article:
Toowong Facts for Kids. Kiddle Encyclopedia.