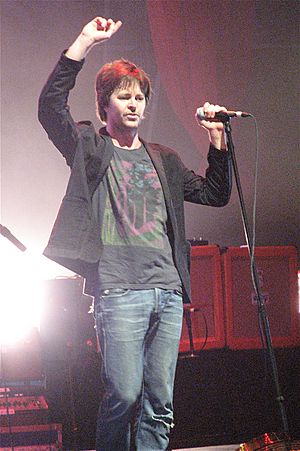 Bernard Fanning performing with Powderfinger in 2006

Born in Brisbane, Fanning joined the band Powderfinger after finishing high school in 1989. He was asked to join by singer and guitar player Ian Haug. He had met Haug while studying journalism at the University of Queensland. He also appeared in the movie Ned Kelly which starred Heath Ledger. Fanning has a small role as a musician in the hotel. He also wrote several songs for the movie, including the title song, "Shelter for My Soul."

Powderfinger have released six albums. Fanning has made a solo album, Tea and Sympathy in 2005. His music has been described as a mixture of blues and acoustic folk. As well as singing, Fanning plays guitar, piano, keyboards and harmonica.

This album was recorded in 2005 while Powderfinger were having a break. Ten of the songs were recorded at Peter Gabriel's Real World studios at Bath, Somerset. The other four tracks where recorded in Brisbane. All the songs were written by Bernard Fanning. Other musicians on the album are John Bedggood, John Marotta, Keith Duffy, Duane Billing, Matt Englebrecht, Chris Bosely, Tchad Blake, Ben Quinn and Stu Miller.

All content from Kiddle encyclopedia articles (including the article images and facts) can be freely used under Attribution-ShareAlike license, unless stated otherwise. Cite this article:
Bernard Fanning Facts for Kids. Kiddle Encyclopedia.