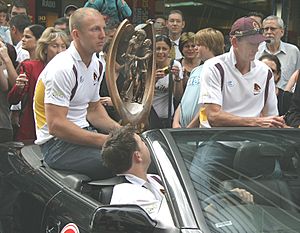 Darren Lockyer and Wayne Bennett parade the premiership after the Brisbane Broncos' Grand Final victory in 2006. 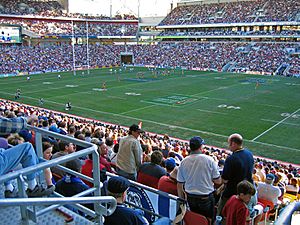 A 2004 match between Brisbane and Canterbury

The National Rugby League (NRL) is a professional sports league in Australia. They play rugby league. There are 16 teams. Fifteen teams are from Australia and one is from New Zealand. The NRL is very popular in Australia but only in the states of New South Wales and Queensland and there is also one team in Victoria. It is the biggest rugby league competition in the world.The teams are the

All content from Kiddle encyclopedia articles (including the article images and facts) can be freely used under Attribution-ShareAlike license, unless stated otherwise. Cite this article:
National Rugby League Facts for Kids. Kiddle Encyclopedia.