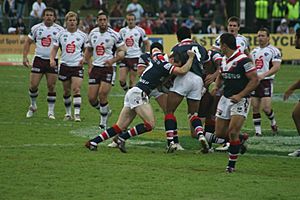 The Manly Warringah Sea Eagles are an Australian professional rugby league team. The team is based on the Northern Beaches of Sydney, New South Wales. They were founded in 1946. They currently play in the National Rugby League competition. They have won eight premierships, most recently in 2011.

All content from Kiddle encyclopedia articles (including the article images and facts) can be freely used under Attribution-ShareAlike license, unless stated otherwise. Cite this article:
Manly Warringah Sea Eagles Facts for Kids. Kiddle Encyclopedia.