Keith Lionel Urban (born 26 October 1967) is a New Zealand Australian singer, songwriter and record producer. In 1991, he released a self-titled debut album and charted four singles in Australia before moving to the United States the following year. He found work as a session guitarist before starting a band known as The Ranch, which recorded one studio album on Capitol Nashville and charted two singles on the US Billboard Hot Country Songs chart.

Urban made his solo American debut in 1999 with a second eponymous album. Certified platinum in the US by the RIAA, it produced his first number one on the Hot Country Songs chart and was named by Billboard as the biggest country hit of the 2000s decade. The album's fourth single, "You'll Think of Me", earned him his first Grammy Award.

Urban has released a total of nine studio albums (one of which was released only in Australia), as well as one album with The Ranch. He has charted 37 singles on the US Hot Country Songs chart, 18 of which went to number one.

Urban is also known for his roles as a coach on the Australian version of the singing competition The Voice and as a judge on American Idol. He is a citizen of Australia and the United States.

In October 2013, during a concert in Tampa, Florida, Urban announced he would be offering his own signature package of guitars and accessories, sold through Home Shopping Network (HSN). HSN offered the guitar packages twice in sixth months, resulting in 42,000 sales. A portion of the proceeds benefit The Mr. Holland's Opus Foundation and the Grammy Foundation. 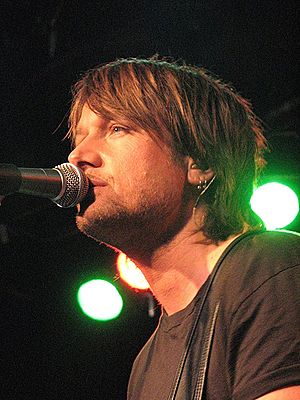 Keith Urban was born in Whangarei, New Zealand, He is the youngest son of Marienne and Robert Urban. He lived with his parents in Caboolture, Queensland, Australia. His father, who owned a convenience store, put an ad for a guitar teacher in his shop window. Urban took lessons from his teacher, Sue McCarthy, and began entering local competitions, in addition to acting in a local theater company. Urban has stated that his guitar playing was influenced by two rock players, Mark Knopfler (Dire Straits) and Lindsey Buckingham (Fleetwood Mac).

In 1983, Urban was a contestant on the Australian TV talent show New Faces. A few years later, he began making the inroads into the Australian country music scene performing on various television programs. Urban also performed regularly on stage at the Northern Suburbs Country Music Club in Bald Hills, where he was a member. He was in a band called 'Kids Country', that performed during school holidays at various venues. 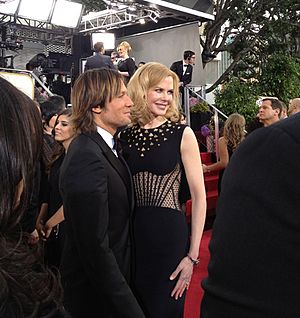 Urban met Australian actress Nicole Kidman at G'Day LA, a Hollywood event honouring Australians, in January 2005, but they reportedly did not begin dating until six months later. Kidman and Urban were married on 25 June 2006, at the Cardinal Cerretti Memorial Chapel in the grounds of St Patrick's Estate, Manly, in Sydney. They have two children.

On 1 October 2007, while riding, Urban skidded off his motorbike when a paparazzo followed him near his home in Sydney; Urban was not hurt. In a statement released by his publicists, Urban said that the incident was "the result of one person's desire to do his job and my desire to maintain my privacy". Urban said that he tried to avoid an oncoming car and dropped his bike. He said the photographer came to his assistance without taking photos. 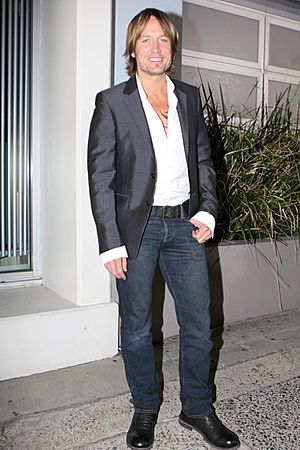 All content from Kiddle encyclopedia articles (including the article images and facts) can be freely used under Attribution-ShareAlike license, unless stated otherwise. Cite this article:
Keith Urban Facts for Kids. Kiddle Encyclopedia.