The Grand Ole Opry is a weekly American country music stage concert in Nashville, Tennessee that has presented the biggest stars of the genre for nearly 85 years. Broadcast by WSM-AM, it is also the longest-running live radio program in history since its beginnings in 1925 as a one-hour showcase for rural music. Dedicated to honoring country music and its history, the Opry showcases a mix of legends and contemporary chart-toppers performing country, bluegrass, folk, comedy, and gospel. Considered an American icon, it attracts hundreds of thousands of visitors from around the world and millions of radio and Internet listeners. Today part of the American landscape, it is "the show that made country music famous" and has been called the “home of American music” and “country’s most famous stage.”

In the 1930s, the show began hiring professionals and expanded to four hours; and WSM, broadcasting by then with 50,000 watts, made the program a Saturday night musical tradition in nearly 30 states. In 1939, it debuted nationally on NBC Radio and became America's favorite radio program. The Opry moved to a permanent home, the Ryman Auditorium, in 1943. As it developed in importance, so did the city of Nashville, which became America's 'country music capital.'

Membership in the Opry remains one of country music's crowning achievements. Such legends as Hank Williams (Hank Williams was banned from the opry and still has not been re-instated), Patsy Cline, Roy Acuff, the Carter family, Bill Monroe, Ernest Tubb, Kitty Wells and Minnie Pearl became regulars on the Opry's stage. In recent decades, the Opry has hosted such contemporary country stars as Dolly Parton, Garth Brooks and Reba McEntire. Since 1974, the show has been broadcast from the Grand Ole Opry House east of downtown Nashville, and performances have been sporadically televised in addition to the radio broadcasts. 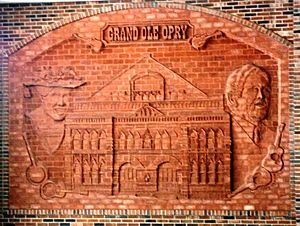 The Grand Ole Opry started as the WSM Barn Dance in the new fifth-floor radio station studio of the National Life & Accident Insurance Company in downtown Nashville on November 28, 1925. On October 18, 1925, management began a program featuring "Dr. Humphrey Bate and his string quartet of old-time musicians." On November 2, WSM hired long-time announcer and program director George D. "Judge" Hay, an enterprising pioneer from the National Barn Dance program at WLS-AM in Chicago, who was also named the most popular radio announcer in America as a result of his radio work with both WLS and WMC-AM in Memphis, Tennessee. Hay launched the WSM Barn Dance with 77-year-old fiddler Uncle Jimmy Thompson on November 28, 1925, which is celebrated as the birth date of the Grand Ole Opry.

Judge Hay, however, liked the Fruit Jar Drinkers and asked them to appear last on each show because he wanted to always close each segment with "red hot fiddle playing." They were the second band accepted on Barn Dance, with the Crook Brothers being the first. When the Opry began having square dancers on the show, the Fruit Jar Drinkers always played for them. In 1926, Uncle Dave Macon, a Tennessee banjo player who had recorded several songs and toured the vaudeville circuit, became its first real star.

The name Grand Ole Opry came about on December 10, 1927. The Barn Dance followed the NBC Radio Network's Music Appreciation Hour, which consisted of classical music and selections from the Grand Opera genre. The final selection that night featured a musical interpretation of an onrushing railroad locomotive. In response to this Judge Hay quipped, "Friends, the program which just came to a close was devoted to the classics. Doctor Damrosch told us that there is no place in the classics for realism. However, from here on out for the next three hours, we will present nothing but realism. It will be down to earth for the 'earthy'." He then introduced the man he dubbed the Harmonica Wizard—DeFord Bailey—who played his classic train song "The Pan American Blues". After Bailey's performance Hay commented, "For the past hour, we have been listening to music taken largely from Grand Opera. From now on we will present the 'Grand Ole Opry'". The name stuck and has been used for the program since.

As audiences for the live show increased, National Life & Accident Insurance's radio venue became too small to accommodate the hordes of fans. They built a larger studio, but it was still not large enough. After several months with no audiences, National Life decided to allow the show to move outside its home offices. In October, 1934, the Opry moved into then-suburban Hillsboro Theatre (now the Belcourt); and then on June 13, 1936, to the Dixie Tabernacle in East Nashville. The Opry then moved to the War Memorial Auditorium, a downtown venue adjacent to the State Capitol. A 25-cent admission was charged in an effort to curb the large crowds, but to no avail. On June 5, 1943, the Opry moved to the Ryman Auditorium. 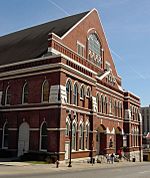 One hour of the Opry was nationally-broadcast by the NBC Red Network from 1939 to 1956; for much of its run, it aired one hour after the program that had inspired it, National Barn Dance. The NBC Radio segment, originally known by the name of its sponsor, The Prince Albert Show, was first hosted by Roy Acuff, who was succeeded by Red Foley in 1946. From October 15, 1955 to September 1956, ABC-TV aired a live, hour-long television version once a month on Saturday nights (sponsored by Ralston-Purina), pre-empting one hour of the then-90-minute Ozark Jubilee. Stars of the Grand Ole Opry, a filmed program, was syndicated in the 1950s by Flamingo Films.

On October 2, 1954, a teenage Elvis Presley made his only Opry performance. Although the audience reacted politely to his revolutionary brand of rockabilly music, after the show he was told by Opry manager Jim Denny that he ought to return to Memphis to resume his truck-driving career, prompting him to swear never to return. In an era when the Grand Ole Opry represented solely country music, audiences did not accept Elvis on the Opry because of his infusion of rhythm and blues as well as his infamous body gyrations, which many viewed as vulgar. In the 1990s, Garth Brooks was made an member of the Opry and was credited with selling more records than any other singer since Presley. Brooks commented that one of the best parts of playing on the Opry was that he appeared on the same stage as Presley.

In the 1960s, as the hippie counterculture movement spread, the Opry maintained a straight-laced, conservative image with "longhairs" not being featured on the show. The Byrds were a notable exception. Country-rock pioneer Gram Parsons, who at that time was a member of The Byrds, was in Nashville to work on the band's country-rock album, Sweetheart of the Rodeo. The band's record label, Columbia Records, had arranged for The Byrds to be allowed to perform at the Ryman on March 15, 1968, a prospect that thrilled Parsons. However, when the band took the stage the audience's response was immediately hostile, resulting in derisive heckling, booing and mocking calls of "tweet, tweet." The Byrds further outraged the Opry establishment by breaking with accepted protocol when they performed Parsons' song "Hickory Wind" instead of the Merle Haggard song "Life in Prison", as had been announced by compare Tompall Glaser.

The Ryman was home to the Opry until 1974, when the show moved to the 4,400-seat Grand Ole Opry House, located nine miles east of downtown Nashville on a new site that was part of the Opryland USA theme park. Opening night, March 16, was attended by President Nixon.

While the theme park was closed in 1997 and replaced by the Opry Mills mall, Opry House itself was left intact and incorporated into the new facility. Currently the Opry plays several times a week at the Grand Ole Opry House, except for an annual winter run at the Ryman Auditorium.

The Grand Ole Opry is broadcast live on WSM-AM at 7 p.m. Central Time on Saturday nights. A similar program, the Friday Night Opry, airs live on Friday nights. From March through December, the Tuesday Night Opry is also aired live. A Wednesday Night Opry program is scheduled to debut in summer, 2010.

The Opry can also be heard live on The Roadhouse (XM Satellite Radio channel 10, and Sirius channel 62). A condensed radio program, America's Opry Weekend, is syndicated to stations around the United States. The program is also streamed on WSM's Web site.

PBS televised the program live from 1978 to 1981. In 1985, The Nashville Network began airing an edited half-hour version of the program as Grand Ole Opry Live; the show moved to Country Music Television and CMT Canada in 2001 (expanding to an hour in the process), and then to the Great American Country (GAC) cable network in 2003. The television version on GAC (Opry Live on Saturdays) is currently on hiatus.

All content from Kiddle encyclopedia articles (including the article images and facts) can be freely used under Attribution-ShareAlike license, unless stated otherwise. Cite this article:
Grand Ole Opry Facts for Kids. Kiddle Encyclopedia.