The Cumberland River is a major waterway of the Southern United States. The 688-mile-long (1,107 km) river drains almost 18,000 square miles (47,000 km2) of southern Kentucky and north-central Tennessee. The river flows generally west from a source in the Appalachian Mountains to its confluence with the Ohio River near Paducah, Kentucky, and the mouth of the Tennessee River. Major tributaries include the Obey, Caney Fork, Stones, and Red rivers.

Although the Cumberland River basin is predominantly rural, there are also some large cities on the river, including Nashville and Clarksville, both in Tennessee. In addition, the river system has been extensively developed for flood control, with major dams impounding both the main stem and many of its important tributaries.

Its headwaters are three separate forks that begin in Kentucky and converge in Baxter, KY, located in Harlan County. Martin's Fork starts near Hensley Settlement on Brush Mountain in Bell County and snakes its way north through the mountains to Baxter. 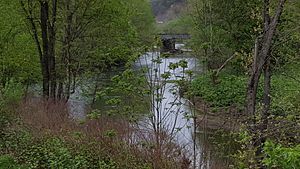 Confluence of the Cumberland River at Baxter

From there, the wider, now named Cumberland River continues flowing west through the mountains of Kentucky before turning northward toward Cumberland Falls

The 68-foot (21 m) falls is one of the largest waterfalls in the southeastern United States and is one of the few places in the Western Hemisphere where a moonbow can be seen.

Beyond Cumberland Falls, the river turns abruptly west once again and continues to grow as it converges with other creeks and streams. It receives the Laurel and Rockcastle rivers from the northeast and then the Big South Fork of the Cumberland River from the south. From here it flows into the man-made Lake Cumberland, formed by Wolf Creek Dam. The more than 100-mile (160 km) reservoir is one of the largest artificial lakes in the eastern US. 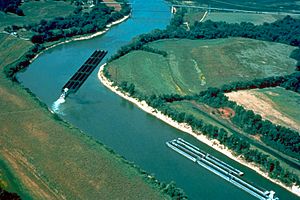 Barge traffic on the Cumberland River. The U.S. Army Corps of Engineers maintains the river for tug-and-barge navigation

The explorer Thomas Walker of Virginia in 1758 named the river, but whether for the Duke of Cumberland or the English county of Cumberland is not known.

The Cumberland River was called Wasioto by the Shawnee Native Americans, who lived in this area. French traders called it the Riviere des Chaouanons, or "River of the Shawnee" for this association. The river was also known as the Shawnee River (or Shawanoe River) for years after Walker's trip.

Important first as a passage for hunters and settlers, the Cumberland River also supported later riverboat trade, which traveled to the Ohio and Mississippi rivers. Villages, towns, and cities were located at landing points along its banks. Through the middle of the 19th century, settlers depended on rivers as the primary transportation routes for trading and travel.

All content from Kiddle encyclopedia articles (including the article images and facts) can be freely used under Attribution-ShareAlike license, unless stated otherwise. Cite this article:
Cumberland River Facts for Kids. Kiddle Encyclopedia.