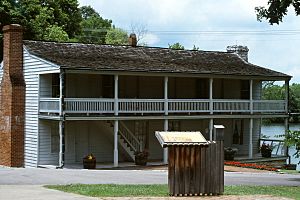 Dover is a city in and the county seat of Stewart County, Tennessee, 67 miles (108 km) west-northwest of Nashville on the Cumberland River. Fort Donelson National Cemetery is in Dover. The population was 1,442 at the 2000 census and the 2010 census showed a population of 1,417.

Dover is part of the Clarksville, TN–Kentucky Metropolitan Statistical Area.

Fort Donelson, was the site of a major Union victory in the Civil War, is located west of downtown Dover and located inside Fort Donelson National Battlefield Park.

Land Between the Lakes National Recreation Area is located 6 miles (9.7 km) from downtown.

All content from Kiddle encyclopedia articles (including the article images and facts) can be freely used under Attribution-ShareAlike license, unless stated otherwise. Cite this article:
Dover, Tennessee Facts for Kids. Kiddle Encyclopedia.