Stewart County is a county located in the U.S. state of Tennessee. As of the 2010 census, the population was 13,324. Its county seat is Dover.

Stewart County is home to Fort Donelson, the site of a Confederate stand against the Union's push up the Cumberland River during the Civil War.

Stewart County was created in 1803 from a portion of Montgomery County, and was named for Duncan Stewart, an early settler and state legislator. During the Battle of Fort Donelson, the county seat, Dover, was burned by Union troops to prevent its capture by General Nathan B. Forrest.

Tobaccoport Saltpeter Cave was intensely mined for saltpeter, possibly during the War of 1812. Saltpeter is the main ingredient of gunpowder and was obtained by leaching the earth from the cave. This area fell under Union control in February 1862, early in the Civil War, and it seems unlikely that mining could have happened before that.

Federal and state agencies control nearly 44% of the land in the county. 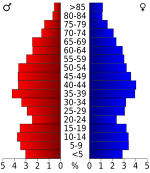 All content from Kiddle encyclopedia articles (including the article images and facts) can be freely used under Attribution-ShareAlike license, unless stated otherwise. Cite this article:
Stewart County, Tennessee Facts for Kids. Kiddle Encyclopedia.