Kids Encyclopedia Facts
Not to be confused with Benton, Tennessee.

Benton County is a county located in the U.S. state of Tennessee. As of the 2010 census, the population was 16,489. Its county seat is Camden. The county was created in December 1835 and organized in 1836.

Benton County is located in northwest Tennessee, bordering the western branch of the Tennessee River and 30 miles south of the Kentucky border. Aside from Camden, other major communities include agrarian communities Big Sandy and Holladay. It is known well in the area for its duck hunting and fishing industries, and in the past, was recognized for sorghum production, although it is no longer produced there.

Benton County was formed in 1835 from part of Humphreys County. It was named in honor of David Benton (1779–1860), who was an early settler in the county and a member of the Third Regiment, Tennessee Militia in the Creek War. 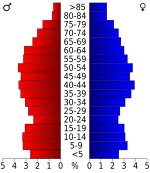 Of the 16,459 people leaving in Benton County .03 percent are on some form of state advised probation.

All content from Kiddle encyclopedia articles (including the article images and facts) can be freely used under Attribution-ShareAlike license, unless stated otherwise. Cite this article:
Benton County, Tennessee Facts for Kids. Kiddle Encyclopedia.