Kids Encyclopedia Facts
Not to be confused with Decatur, Tennessee.

Decatur County is a county located in the U.S. state of Tennessee. As of the 2010 census, the population was 11,757. Its county seat is Decaturville.

This county is named after naval hero Stephen Decatur, Jr., who gained national recognition in the First Barbary War,the Second Barbary War,and the War of 1812 by his leadership and achievements at sea. The county was created in November 1845 from the part of Perry County west of the Tennessee River in response to a petition by citizens on the west side of the river who lacked easy access to the county seat on the east side.

In 2015, the Decatur County clerk of court and the entire staff of that office resigned, to express conscientious objection to the United States Supreme Court's ruling in Obergefell v. Hodges, which would oblige the office to issue marriage licenses to same-sex couples. 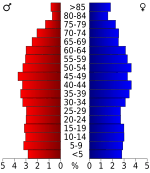 All content from Kiddle encyclopedia articles (including the article images and facts) can be freely used under Attribution-ShareAlike license, unless stated otherwise. Cite this article:
Decatur County, Tennessee Facts for Kids. Kiddle Encyclopedia.