Kids Encyclopedia Facts
For the cities of a similar name, see Henderson, Tennessee and Hendersonville, Tennessee.

Henderson County is a county located in the U.S. state of Tennessee. As of the 2010 census, the population was 27,769. Its county seat is Lexington. The county was founded in 1821 and named for James Henderson, a soldier in the War of 1812.

Henderson County was established in 1821; it was named for Lt. Colonel James Henderson, Jr. (1775-1814), of the Tennessee State Militia, who was killed in late December 1814 below New Orleans during a clash with the British Army. Henderson is said to have served in earlier conflicts such as the Creek Indian war, which took place during the same overall time period as the War of 1812.

After the Battle of New Orleans, Major General William Carroll's Tennessee brigade, which was the largest single force under General Andrew Jackson's command in Louisiana, established their outgoing camp upriver from New Orleans and named it Camp Henderson.

General Carroll's first term as Governor of Tennessee began the same year that Henderson County was established. Perhaps it was he who proposed naming the new county after his fallen officer James Henderson. 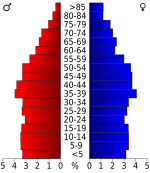 The Beech River Regional Airport is a public-use airport located five nautical miles northwest (5.8 mi, 9.3 km) northwest of the central business district of Parsons, a city in Decatur County. The airport is located in Darden, Tennessee.

All content from Kiddle encyclopedia articles (including the article images and facts) can be freely used under Attribution-ShareAlike license, unless stated otherwise. Cite this article:
Henderson County, Tennessee Facts for Kids. Kiddle Encyclopedia.