Chester County is a county located in the U.S. state of Tennessee. As of the 2010 census, the population was 17,131. Its county seat is Henderson. The county was created in 1879 and organized in 1882.

Chester County was the last county formed in Tennessee, created by the General Assembly in 1875 from adjacent parts of neighboring Hardeman, Henderson, McNairy, and Madison counties. This land was used to create a county named Wisdom County, but "Wisdom County" was never organized, and in March 1879 the Assembly repealed this and created Chester County out of the same land. Lawsuits by opponents of the creation of the new county delayed actual organization until 1882. Chester County was named for Colonel Robert I. Chester, a quartermaster in the War of 1812, an early postmaster in Jackson, and a federal marshal. 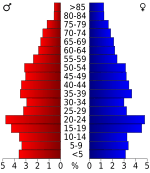 All content from Kiddle encyclopedia articles (including the article images and facts) can be freely used under Attribution-ShareAlike license, unless stated otherwise. Cite this article:
Chester County, Tennessee Facts for Kids. Kiddle Encyclopedia.