Sheriff Buford Pusser, whose story was told in the Walking Tall series of movies, was the sheriff of McNairy County from 1964 to 1970.

McNairy County is the location of the Coon Creek Science Center, a notable fossil site that preserves Late Cretaceous marine shells and vertebrate remains (such as mosasaurs). 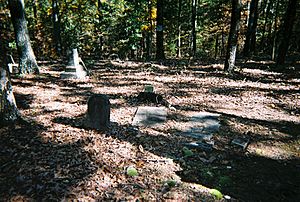 McNairy County was formed in 1823 from parts of Hardin County, and was named for Judge John McNairy.

Buford Pusser served as the sheriff of McNairy County from 1964 to 1970. The courthouse and jail in Selmer were his base of operations. He gained prominence for his fight against illegal distilleries, bootleggers, gambling establishments, and corruption in the county. His story has been made famous in the Walking Tall series of movies starring Joe Don Baker, Bo Svenson and Brian Dennehy, and in numerous documentaries and books.

The oldest existing business in McNairy County is its newspaper, the Independent Appeal, which was founded in 1902. It is located in Selmer.

McNairy County News began publication in 2009. The MCN is located at 252 Mulberry Avenue in Selmer. The paper has an online presence at mcnairycountynews.com and a Facebook page, as well as a weekly printed publication each Thursday.

The major highways U.S. Route 64 (east-west) and U.S. Route 45 (north-south) pass through McNairy County and intersect in Selmer. Between the late 1990s and mid 2010s, both highways were upgraded to four lane divided highways, giving the county quicker access to the surrounding areas. McNairy County's position on Route 64 places it on the historic Lee Highway, which stretches from New York to San Francisco. 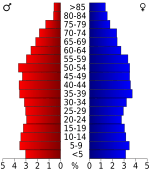 McNairy County is the site of 5,000-acre (20 km2) Big Hill Pond State Park, which is forested with timberland and hardwood bottomland. The county is also the location of the Coon Creek Science Center, a notable fossil site, located in Leapwood over the Coon Creek Formation, which preserves Late Cretaceous marine shells and vertebrate remains (such as mosasaurs) left there 70 million years ago.

McNairy County is home to one of the most successful rural arts organizations in the state, AiM (Arts in McNairy). AiM pushes for arts recognition in the county and surrounding area through theatre productions, exhibits of local artists, and the bi-annual Artisan Trail. 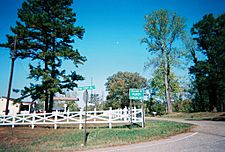 All content from Kiddle encyclopedia articles (including the article images and facts) can be freely used under Attribution-ShareAlike license, unless stated otherwise. Cite this article:
McNairy County, Tennessee Facts for Kids. Kiddle Encyclopedia.