Adamsville is a town in Hardin and McNairy counties, Tennessee. The population was 2,207 at the 2010 census. Adamsville is named after George D. Adams, who operated an inn and stagecoach stop in the 1840s. Adamsville's nickname is the "Biggest Little Town in Tennessee" and was the home of Sheriff Buford Pusser.

The area in and around Adamsville was first surveyed by Davy Crockett. Just after 1818, George C. Adams and his family were the first settlers of European ancestry to locate to the area. A trading post would be opened, just north of where the Adamsville Cemetery is today. The trading post served the local Native communities and Anglo settlers. In 1838 the Bell's detachment of the Trail of Tears traveled through Adamsville. Settlers from North Carolina and Maury County, Tennessee migrated to the area and the settlement developed an agricultural economy. When the Battle of Shiloh was fought in 1862, Union Army soldiers were camped in Adamsville.

Adamsville was incorporated in 1870. The town struggled to grow until roads were improved in the early 20th century. Agriculture remained the main economic developer until the textile industry came into the area with Myrna Mills factory opening, and then other factories following.

Adamsville is located primarily in McNairy County; only a small part of the municipal area lies in Hardin County.

There were 835 households out of which 25.6% had children under the age of 18 living with them, 52.2% were married couples living together, 10.7% had a female householder with no husband present, and 33.8% were non-families. 31.4% of all households were made up of individuals and 18.6% had someone living alone who was 65 years of age or older. The average household size was 2.20 and the average family size was 2.73. 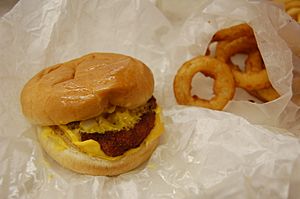 A slugburger with onion rings.

Adamsville's Fat Cat Grill serves "slugburgers", a delicacy found in west Tennessee, northeast Mississippi and northwest Alabama. The Fat Cat slugburger consists of a hamburger patty made of beef and soy grits which is then deep fried and served on a bun with condiments. Another local delicacy is the baked cabbage at the Saw Meal Restaurant and Steakhouse.

The Buford Pusser Home and Museum is located in Adamsville in the former home of the county sheriff. Pusser is also buried in the Adamsville Cemetery. Gibb's Gas & Oil Collectibles is an appointment only museum of old gas pumps, gas and oil signs, oil cans, and other service station memorabilia. Adamsville's public library is the Irving Meek Jr. Memorial Library. The local War Memorial Park is located off of Highway 64 and Old Stage. It commemorates veterans and those who died from Adamsville in World War I and II, the Korean War and Vietnam War. The Old Home Motel was built in 1960 by Joe and Juanita Richardson. Buford Pusser lived at the hotel for a time, and Elvis Presley stayed the night there.

Established in 1998, the Adamsville Recreation & Parks Department maintains flag and American football leagues, a cheerleading team, basketball and soccer teams. The town also offers other sports for youth and adults including softball and baseball. Every year the department plans a 5K run to coincide with the annual Buford Pusser Memorial Festival. The city park, also named after Buford Pusser, sits on land that was founded as a sandlot and horse barn by Pusser and the Adamsville Jaycees in 1973. The city park formed out of a fundraiser which featured musicians George Jones and Tammy Wynette, and continued funding and grants go towards improving the park. The city park has a lighted basketball court and tennis courts, a playground, three ball fields, an open-air pavilion, grills and picnic tables, and a walking track. Shiloh Golf Course is an 18-hole golf course. The golf course is on historical land: the number two and number four greens lie along the road where General Lew Wallace marched his three brigades to the Battle of Shiloh on April 6, 1852.

The department also maintains a senior center which distributes Meals on Wheels and related services. The Marty community center is also maintained by the Recreation & Parks department for public use and also has live entertainment, including the monthly Adamsville Bluegrass Jamboree.

All content from Kiddle encyclopedia articles (including the article images and facts) can be freely used under Attribution-ShareAlike license, unless stated otherwise. Cite this article:
Adamsville, Tennessee Facts for Kids. Kiddle Encyclopedia.