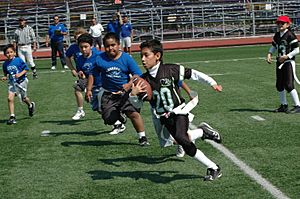 Children playing the sport in Mexico

Flag football is a version of American or Canadian football. The rules are not very different to those of the regular game. Instead of tackling players to the ground, the other team must pull a flag or flag belt off of the player carrying the ball. Flag football is a game played with no padding. Full contact is not allowed. The first game of flag football was played in the 1930s. It was later played on military bases in the 1940s as a game for the military.

Flag football games are 36 minutes long. They are divided into two 18-minute halves. The only time the clock is stopped is in the last two minutes.

To score a touchdown, a player must cross the ball over the goal line. This is worth six points. There are two options for an extra point. The scoring team can try to run the ball into the endzone from either the 3 yard line or the 10 yard line. The 3 yd line is worth 1 point and the 10 yd line is worth 2. If the flag of the player who has the ball is pulled while that person is in their own end zone, it is called a safety. The other team gets two points for this.

All content from Kiddle encyclopedia articles (including the article images and facts) can be freely used under Attribution-ShareAlike license, unless stated otherwise. Cite this article:
Flag football Facts for Kids. Kiddle Encyclopedia.