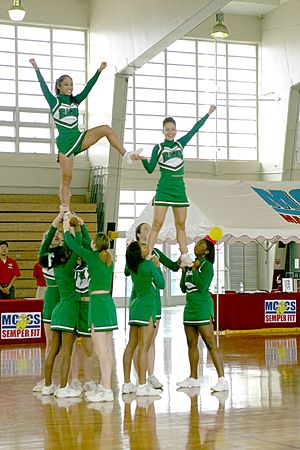 Cheerleaders warming up for competition

Cheerleading is an athletic activity that uses organized routines made up of elements from dance, gymnastics, and stunting to cheer on sports teams at games and matches (hence the name cheerleader- leading the cheer), and/or as a competitive sport. A cheerleading performer is called a cheerleader. It is most common in North America.

Cheerleading is most closely associated with American football, and to a lesser degree basketball. Sports such as soccer, ice hockey, and wrestling rarely have cheerleaders, and some sports like baseball have none at all.

In the 1960s National Football League (NFL) teams began to organize professional cheerleading teams. It was the Dallas Cowboys Cheerleaders who gained the spotlight with their revealing outfits and sophisticated dance moves, which debuted in the 1972-1973 season, but were first seen widely in Super Bowl X (1976). This caused the image of cheerleaders to permanently change, with many other NFL teams emulating them. Most of the professional teams' "cheerleading" squads would more accurately be described as dance teams by today's standards; as they rarely, if ever, actively encourage crowd noise or perform modern cheerleading moves.

The 1980s saw the onset of modern cheerleading with more difficult stunts and gymnastics being incorporated into routines. Cheerleading organizations started applying safety guidelines and offering courses on safety training for coaches and sponsors. In 1984, Cheer Ltd. Inc. (sic) established the National Cheer Conference (NCC) for cheer coaches to receive instruction and hands-on course work in cheerleading techniques. AACCA is the nationally recognized safety organization, conducting safety courses since 1987. A more recent organization to conduct safety courses is the NCSSE.

Today, cheerleading has grown to an estimated 4 million participants in the United States alone.

The 2000 major motion picture Bring It On was a movie based on cheerleading. Followed by Bring It On Again and Bring It On: All or Nothing. 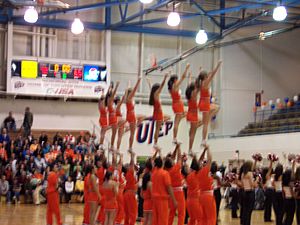 UTEP cheerleaders (orange uniforms) in a stunt for the renaming of Glory Road on the campus, November 29, 2005. The Golddiggers (pompon girls — black and white uniforms) are to the front. 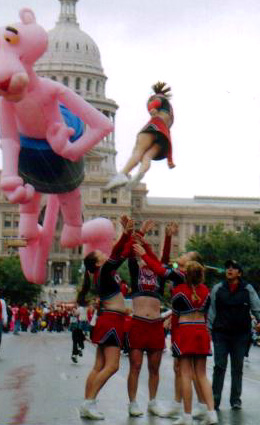 Cheerleaders perform a stunt for parade watchers. The flyer does a full twist in the air as the bases prepare to catch her. 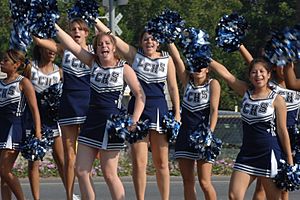 The most basic tumbling skills are a roll, cartwheel or a round-off. Other basic, yet increasingly difficult, skills include back-handsprings and round-off back-handsprings. More advanced skills include: back tucks, layouts, arabians, whipbacks, twisting layouts (fulls), and front tumbling, such as front handsprings, and punch fronts.

Every sideline cheerleading team has their "signature" cheers and chants. Most of the time the cheerleaders and coaches come up with these cheers/chants, although there are a few professional specialists, such as Krazy George Henderson.

Cheers are often longer than chants and usually incorporate jumps, tumbling, or stunting. They tend to focus on cheering for a mascot and getting the crowd to respond. Each word is usually assigned a motion.

Chants are short and repetitive. They are usually repeated three times, but can be varied. They usually have minimal motions that can be performed while standing in a line or just clapped out by a beat.

All content from Kiddle encyclopedia articles (including the article images and facts) can be freely used under Attribution-ShareAlike license, unless stated otherwise. Cite this article:
Cheerleader Facts for Kids. Kiddle Encyclopedia.