Battle of Shiloh facts for kids

The Battle of Shiloh was a battle in the American Civil War. It was fought on April 6 and April 7, 1862, in Tennessee. It was one of the bloodiest battles of the Civil War.

The Union Army of the Tennessee was commanded by Ulysses S. Grant. Grant had captured Fort Henry and Fort Donelson in western Tennessee during the early months of 1862. This forced the Confederate Army to leave Kentucky, western Tennessee, and central Tennessee.

Grant wanted to capture the city of Corinth, Mississippi, next. But his superior, Henry W. Halleck, didn't want Grant to go any further south until other Union soldiers joined him. So Grant moved his army to a place called Pittsburg Landing, which was on the Tennessee River. There was a church near the landing called Shiloh Church. His army stayed there for several weeks. 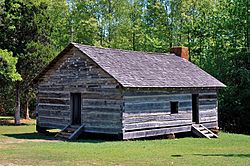 General Albert Sidney Johnston commanded the Confederates. Johnston's second-in-command was P. G. T. Beauregard. Beauregard came up with a plan to recapture western Tennessee. Confederate soldiers from all over the Western theater gathered in Corinth. Then, starting on April 3rd, they marched north toward Grant's army. The Confederate Army was ready to attack on the morning of the 6th.

The battle started around dawn on April 6th. The Confederates surprised the Union Army. After fighting all day, Grant's army retreated back to Pittsburg Landing. Johnston was killed during the battle, and Beauregard took over the Confederate Army.

More Union soldiers arrived at the battlefield during the night. They were part of the Army of the Ohio, commanded by Don Carlos Buell.

Grant attacked the Confederates the next morning. The two armies fought all morning and during the afternoon. By 4 p.m., Beauregard decided to retreat back to Corinth.

Interesting facts about the Battle of Shiloh 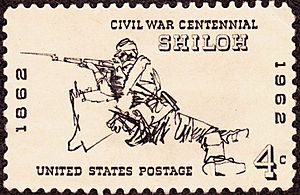 Battle of Shiloh stamp issued in 1962

All content from Kiddle encyclopedia articles (including the article images and facts) can be freely used under Attribution-ShareAlike license, unless stated otherwise. Cite this article:
Battle of Shiloh Facts for Kids. Kiddle Encyclopedia.