Wayne County is a county located in Tennessee. As of the 2010 census, the population was 17,021. Its county seat is Waynesboro. The county is named after General "Mad Anthony" Wayne.

Wayne County was created in 1817 from parts of Hickman and Humphreys counties. Waynesboro, its county seat, was established in 1821. The city of Clifton emerged as a key river port in the mid-19th century.

According to the U.S. Census Bureau, the county has a total area of 736 square miles (1,910 km2), of which 734 square miles (1,900 km2) is land and 1.6 square miles (4.1 km2) (0.2%) is water. It is the second-largest county in Tennessee by area. The county lies primarily along the southwestern Highland Rim. The Tennessee River flows along Wayne County's northwestern border with Decatur County. The Buffalo River, a tributary of the Duck River, flows through the northern part of Wayne County. The Green River, a tributary of the Buffalo, flows through Waynesboro. 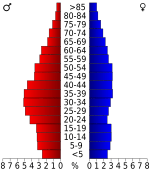 The religious affiliations of the people of Wayne County, Tennessee are:

All content from Kiddle encyclopedia articles (including the article images and facts) can be freely used under Attribution-ShareAlike license, unless stated otherwise. Cite this article:
Wayne County, Tennessee Facts for Kids. Kiddle Encyclopedia.