Collinwood was established in 1913 as a stop on the Tennessee Western Railroad, a rail line constructed to serve the area iron industry. The city was named for W.W. Collins, president of the Collinwood Land Company, which platted the city. While the railroad, which intersected the L&N system at Iron City, was originally to extend northward to Hohenwald, plans for extension beyond Collinwood never materialized, and the city became the railroad's western terminus.

The Collinwood Land Company advertised lots for the new city in June 1913, and by the following year, about 300 people were living in the city. Most of the residents worked for the railroad or in the local lumber industry. During World War I, Collinwood's economy boomed, and its population swelled to over 2,000. A wood alcohol (methanol) distillation plant and blast furnace were constructed in the years following the war, but as demand for these products fell, the economy collapsed and the city began to decline. The tracks connecting Collinwood with the L&N system were abandoned in the late 1930s.

The Collinwood Railroad Station, built in 1916, still stands near the city of the city, and is listed on the National Register of Historic Places. The station, which mostly follows design patterns typical of L&N depots of the period, is the last major remnant of the area's railroad history. The station now serves as a library and museum.

Collinwood is concentrated along a stretch of State Route 13, roughly halfway between Waynesboro to the north and the Tennessee-Alabama state line to the south. State Route 203 intersects SR 13 at the southern tip of Collinwood, connecting the city with Savannah to the west. The Natchez Trace Parkway traverses Collinwood from northeast to southwest.

According to the United States Census Bureau, the city has a total area of 2.8 square miles (7.3 km2), all of it land. 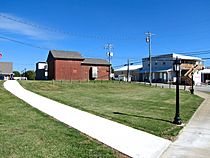 Buildings at Depot and 3rd

There were 428 households out of which 30.6% had children under the age of 18 living with them, 52.8% were married couples living together, 13.1% had a female householder with no husband present, and 30.6% were non-families. 27.6% of all households were made up of individuals and 13.3% had someone living alone who was 65 years of age or older. The average household size was 2.39 and the average family size was 2.88.

All content from Kiddle encyclopedia articles (including the article images and facts) can be freely used under Attribution-ShareAlike license, unless stated otherwise. Cite this article:
Collinwood, Tennessee Facts for Kids. Kiddle Encyclopedia.