West Tennessee is one of the three Grand Divisions of the state of Tennessee. Of the three, it is the one that is most sharply defined geographically. Its boundaries are the Mississippi River on the west and the Tennessee River on the east. This region's boundaries have been expanded slightly to include all of Hardin County, which is bisected by the Tennessee River. The states of Kentucky and Mississippi provide the respective northern and southern boundaries, with the exception of a portion of Lauderdale County, Alabama, which lies southeast of Hardin County. The region consists of twenty-one counties.

While the region of Tennessee west of the Tennessee River was, on paper, part of Tennessee at its statehood in 1796, it had been recognized as Chickasaw territory by the 1786 Treaty of Hopewell, and it did not come under actual American control until it was obtained in a series of cessions by the Chickasaw in 1818, an acquisition known as the Jackson Purchase, and named for Andrew Jackson, one of the officials involved. The purchase also included the westernmost area of Kentucky as well as a part of northern Mississippi. Although the vast majority of the purchases lie in Tennessee, the term "Jackson Purchase" is used today mostly to refer solely to the Kentuckian portion of the acquisition. This term is also somewhat misleading. Jackson, a military officer at the time, was one of several federal treaty commissioners. He did not personally negotiate the whole land cession, nor was it done in a single treaty. 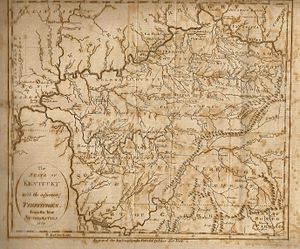 Low's Map of Kentucky and neighboring Territories did not yet include West Tennessee, controlled by the Chickasaw Nation until 1818. From Low's Encyclopaedia

West Tennessee is located within the Mississippi Embayment, part of the Gulf Coastal Plain. Because of this, the terrain is flatter than the eastern parts of the state. Areas right along the Mississippi River are located within the alluvial floodplain. However, much of the western counties of the region are protected from flooding by the Chickasaw Bluffs, ridges of loess rising 50–200 feet above the floodplain. Although the land is lower and flatter than Middle and East Tennessee, some hilly terrain exists, especially along the bluffs bordering the Mississippi River and the land bordering the Tennessee River (known as the West Tennessee Highlands). Hilly land in these areas is forested. Otherwise, most of the land in West Tennessee is used as farmland. The soil in this part of the state comes from when a prehistoric sea dried up and left sediment in its place. Unlike in the rest of the state, bedrock is buried a few thousand feet below the surface.

Several rivers and streams, besides the Mississippi and Tennessee, exist in West Tennessee. All of them were originally slowly moving swamps or low-gradient meandering streams before nearly all of them were channelized in the 20th century. Rivers that empty into the Mississippi River include the Obion River, Forked Deer River, Hatchie River (which has not been channelized), Loosahatchie River, Wolf River, and Nonconnah Creek. Rivers that empty into the Tennessee River include the Big Sandy River and Beech River.

West Tennessee sits on top of an artesian aquifer. This aquifer is the main source of water for Memphis and Shelby County, as well as many other communities. In the Memphis area and areas along the bluffs, the loess and gravel serves as a cap over the sand making up the aquifer. The rest of West Tennessee serves as a recharge area for the aquifer. This aquifer provides some of the cleanest water in the United States.

The entire West Tennessee region, especially the area closest to the Mississippi River, lies in a zone of fairly high estimated risk for earthquakes. This area is at the edge of the New Madrid Seismic Zone. In 1811 and 1812, three of the largest quakes in American history hit this region back when it had few European settlers. By some reports, the earthquakes briefly reversed the flow of the Mississippi River. A lasting legacy of the earthquakes is the Reelfoot Lake, a large but shallow body of water in northwestern Tennessee that was created by the earthquakes.

There are 21 counties in West Tennessee:

Seven of the thirteen cities in West Tennessee with a population greater than 10,000 are located within Shelby County, which comprises Memphis and its six suburbs.

West Tennessee registered a population growth rate significantly below the state and national average (11.5% and 9.7% respectively) from 2000 to 2010, significantly less than that of Middle and East Tennessee (18.0% and 10.4%). West Tennessee's population grew only 4.2 percent during the 10-year period; predominantly black Haywood County was the most rapidly diminishing county in the state, losing 5.1% of its population. Only three counties (Chester, Fayette, and Tipton, all increasingly playing a role as bedroom suburbs of metropolitan areas) recorded a growth rate of more than 10 percent from 2000 to 2010. Many West Tennessee counties are not on the state's major transportation routes (railroads or highways) and have no air transport to speak of; and rely heavily on agriculture. With fewer farms and farmers, and the continuing decline of manufacturing, economic opportunities diminish in these counties, and young residents look outside the area for jobs, leading to substantial out-migration. Thus, the population in West Tennessee is increasingly older, with median ages above the state average in most counties; and the over-65 age group constitutes a larger percentage of the total population than the state average, leading in turn to a below-replacement-rate birth/death ratio, and economic decline, including empty and neglected housing and business structures.

The U.S. Highways that travel through West Tennessee are:

Freight railways crisscross West Tennessee. Norfolk Southern maintains a line running through the southern counties from Memphis to the shoals area of Alabama. They also maintain a line which runs from South Fulton through Martin, Milan, Jackson, and Selmer crossing into Mississippi. Canadian National runs a line from South Fulton, through Union City, Dyersburg and Memphis. From here the line splits into two: one runs through the Mississippi Delta and the other one runs through the center of Mississippi. BNSF runs through Memphis from Mississippi to downtown Memphis, crossing the River on the Frisco Bridge. Union Pacific maintains a short line through Memphis crossing the river on the Harahan Bridge and connects with other lines in the area. CSX runs a line from Memphis through Memphis, Brownsville, Humboldt, Milan, McKenzie, and Camden, then crossing the Tennessee River. Many other short line railroads exist scattered throughout the region.

Amtrak runs the City of New Orleans passenger rail service along the CN rail line. There are two stops in West Tennessee along this route, which are in Downtown Memphis at Central Station and in Newbern north of Dyersburg.

West Tennessee has one international airport, Memphis International Airport. This is the largest freight airport in the United States and the second largest in the world. Two regional airports exist: McKellar-Sipes Regional Airport is located outside of Jackson and Dyersburg Regional Airport southwest of Dyersburg. In addition to these, several general aviation exist along with two former military airstrips. Arnold Field in Lauderdale County maintains an airstrip and Millington Regional Jetport serves as a backup landing strip for FedEx.

All content from Kiddle encyclopedia articles (including the article images and facts) can be freely used under Attribution-ShareAlike license, unless stated otherwise. Cite this article:
West Tennessee Facts for Kids. Kiddle Encyclopedia.