The Big Sandy River is a 60-mile-long (97 km) tributary of the Tennessee River in the U.S. state of Tennessee. Via the Tennessee and Ohio rivers, it is part of the Mississippi River watershed. The Big Sandy rises about 5 miles (8 km) northwest of Lexington, in the same vicinity as two other important rivers of West Tennessee, the Beech River and the Middle Fork of the Forked Deer River.

From near its source downstream, much of the Big Sandy River has been channelized. It crosses into Carroll County near the community of Yuma. In Carroll County, it passes slightly east of the town of Bruceton. Turning somewhat northeast, it crosses into Benton County. The former channel (prior to channelization) of the Big Sandy forms several miles of the boundary between Benton County and Henry County. The lower Big Sandy is impounded by the Kentucky Dam project of the Tennessee Valley Authority (TVA); it forms the biggest single embayment on Kentucky Lake.

The head of the embayment is the site of the town of Big Sandy and nearby is a major "dewatering area". This is an almost flat area (superficially resembling a tidal flat) which is flooded or not, depending on TVA's assessment of a proper level for Kentucky Lake, taking into consideration flood control, navigation, electrical power needs, and recreation (in that order, according to the 1933 act establishing the Authority). Another, even larger, dewatering area is maintained by the help of an auxiliary dam on a tributary, West Sandy Creek.

Despite the extensive channelization activity, much of what the river must have been prior to this can be seen in the wetlands surrounding it near the Interstate 40 bridge and also along State Route 69 between Camden and Paris. 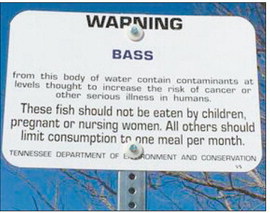 The Tennessee Department of Environment and Conservation (TDEC) has been collecting data on possible contaminates in the numerous fish species in the Big Sandy River and embayment. These studies started in 2009 and continued through 2014. After which an advisory was issued including all of the Big Sandy and its embayment on the Tennessee River. The advisory states that Largemouth bass and spotted bass can have mercury contamination, and that children, expecting mothers, and mothers who are breastfeeding should not consume them at all. The advisory goes on to state that all others should limit their consumption to these bass species to once per month. Mercury can have serious effects on the development of children.

All content from Kiddle encyclopedia articles (including the article images and facts) can be freely used under Attribution-ShareAlike license, unless stated otherwise. Cite this article:
Big Sandy River (Tennessee) Facts for Kids. Kiddle Encyclopedia.