Paris is a city in and the county seat of Henry County, Tennessee, United States. As of the 2020 census, the city had a population of 10,316.

A 70-foot (21 m) replica of the Eiffel Tower stands in the southern part of Paris.

The present site of Paris was selected by five commissioners appointed to the task at the December 1822 session of the Court of Pleas and Quarter Sessions of Henry County. Their choice was fifty acres, 37 and one half of which were owned by Joseph Blythe and 12 and one half owned by Peter Ruff, both of whom gifted the land. A public square, streets, alleys and 104 lots were laid off and the lots were sold at auction over a two-day period in either March or April 1823.

Paris was incorporated on September 30, 1823. It was the first town incorporated in West Tennessee, followed by Lexington on October 9, 1824, and Memphis on December 19, 1826. The city was named after Paris, France, in honor of the Marquis de Lafayette. 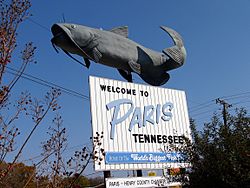 The text of the sign beneath the catfish statue reads Welcome to Paris, Tennessee.

Paris is home of the "World's Biggest Fish Fry". The festival is held every year and culminates on a weekend, on the last full week in April, with a parade, an art and craft fair, a rodeo and a fun fair. Part of the festivities include the "catfish races." There is a sign which features a roughly 20-foot (6.1 m) long catfish that can be seen when entering the town from the south on U.S. Route 79. As Kentucky Lake is only a 20-minute drive from downtown, fishing is a popular activity around the Williams Lake and Paris Landing area.

Paris is known for its support of the arts. Many large events of musical nature take place in the city's auditorium, the Krider Performing Arts Center. Known as "KPAC", the building is attached to the city's public elementary school, Paris Elementary.

From 1922 to 1924, Paris was home to a Minor League Baseball team that played in the Kentucky–Illinois–Tennessee League as the Paris Travelers (1922) and the Paris Parisians (1923–1924). HCHS Football team has won the 5A State Championship twice.

All content from Kiddle encyclopedia articles (including the article images and facts) can be freely used under Attribution-ShareAlike license, unless stated otherwise. Cite this article:
Paris, Tennessee Facts for Kids. Kiddle Encyclopedia.