The Chicago Tribune is a daily newspaper based in Chicago, Illinois, United States, owned by tronc, Inc., formerly Tribune Publishing. Founded in 1847, and formerly self-styled as the "World's Greatest Newspaper" , it remains the most-read daily newspaper of the Chicago metropolitan area and the Great Lakes region. It is the eighth-largest newspaper in the United States by circulation. 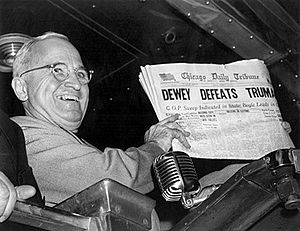 Truman was widely expected to lose the 1948 election, and the Chicago Tribune ran the incorrect headline, "Dewey Defeats Truman".

The paper is well known for a mistake it made during the 1948 presidential election. At that time, much of its composing room staff was on strike. The early returns led editors to believe (along with many in the country) that the Republican candidate Thomas Dewey would win. An early edition of the next day's paper carried the headline "Dewey Defeats Truman", turning the paper into a collector's item. Democrat Harry S. Truman won and proudly brandished the newspaper in a famous picture taken at St. Louis Union Station. Beneath the headline was a false article, written by Arthur Sears Henning, which purported to describe West Coast results although written before East Coast election returns were available.

All content from Kiddle encyclopedia articles (including the article images and facts) can be freely used under Attribution-ShareAlike license, unless stated otherwise. Cite this article:
Chicago Tribune Facts for Kids. Kiddle Encyclopedia.