The Great Chicago Fire was a large fire that started on Sunday October 8, 1871 in Chicago, Illinois, United States.

The second red star of the Chicago flag represents the fire.

How did it start 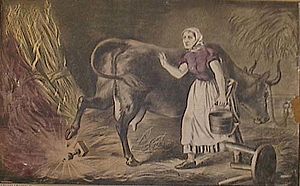 O'Leary and her cow

No one is sure what caused the fire. A legend says that it started when a cow knocked over a lantern in Catherine O'Leary's barn on De Koven Street. The fire began in a neighborhood southwest of the city center. A long period of hot, dry, windy conditions, and the wooden construction of the buildings made the fire jump from place to place and also leapt the river.

When did it end and why

It burned until Tuesday October 10, 1871 when rain started to fall.

How much did it destroy

The fire destroyed 3.3 square miles (8.5 square kilometers) and $192,000,000 in property. About 100,000 people were left homeless. Three hundred people died. Because of a large fire the night before, firefighters were too tired to quickly put out these fires.

The oldest structure left standing in the area where the fire burned is the Couch family tomb. This stone tomb was built in 1858.

Not all of the city was destroyed. Important places like the Stock Yards, where animals were slaughtered, were not damaged. Neither was the railroad system.

All content from Kiddle encyclopedia articles (including the article images and facts) can be freely used under Attribution-ShareAlike license, unless stated otherwise. Cite this article:
Great Chicago Fire Facts for Kids. Kiddle Encyclopedia.