The Chicago Cubs are an American professional baseball team based in Chicago, Illinois. The Cubs compete in Major League Baseball (MLB) as a member club of the National League (NL) Central division. The team plays its home games at Wrigley Field, located on the city's North Side. The Cubs are one of two major league teams in Chicago; the other, the Chicago White Sox, is a member of the American League (AL) Central division. The Cubs, first known as the White Stockings, were a founding member of the NL in 1876, becoming the Chicago Cubs in 1903.

The Cubs have appeared in a total of eleven World Series. The 1906 Cubs won 116 games, finishing 116–36 and posting a modern-era record winning percentage of .763, before losing the World Series to the Chicago White Sox ("The Hitless Wonders") by four games to two. The Cubs won back-to-back World Series championships in 1907 and 1908, becoming the first major league team to play in three consecutive World Series, and the first to win it twice. Most recently, the Cubs won the 2016 National League Championship Series and 2016 World Series, which ended a 71-year National League pennant drought and a 108-year World Series championship drought, both of which are record droughts in Major League Baseball. The 108-year drought was also the longest such occurrence in all major North American sports. Since the start of divisional play in 1969, the Cubs have appeared in the postseason ten times through the 2019 season.

The Cubs are known as "the North Siders", a reference to the location of Wrigley Field within the city of Chicago, and in contrast to the White Sox, whose home field (Guaranteed Rate Field) is located on the South Side. 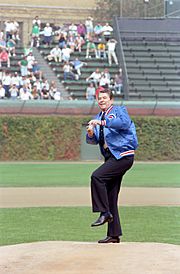 President Ronald Reagan, a Cubs fan, throws the opening pitch for the Cubs 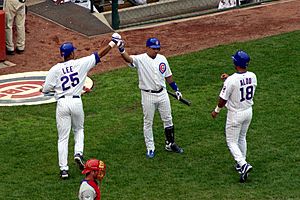 The Chicago Cubs celebrate a home run in 2004.

The Cubs were started in 1870. They originally wore all-white uniforms and were called the Chicago White Stockings. (The current Chicago White Sox got their nickname from the Cubs' original nickname.) By the 1890s the team was called the "Colts". In the early 1900s, the nicknames "Colts" and "Cubs" were both used. The name "Cubs" became official in 1906.

The team was very successful in its early years. They won the first National League championship in 1876. They won several pennants in the 1880s and then again in the early 1900s. The won the World Series in both 1907 and 1908. They have not won a World Series since then, and last appeared in the Series in 1945. They played poorly for over 20 years after that. During the early 1930s, future President Ronald Reagan broadcasted for the Cubs during his early years. Since the 1980s they have been in several postseason series, but had not reached the World Series until 2016. They won that series in seven games.

The Wrigley family, founders of the Wrigley Gum Company, owned the team from about 1920 to about 1980. The Chicago Tribune bought the team and operated them for close to 30 years. They were sold to the Ricketts family in 2009. 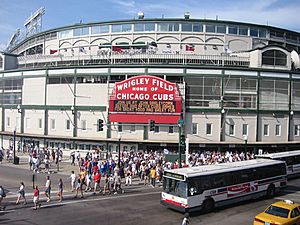 When playing home games in Chicago, the Cubs play at Wrigley Field. The stadium was built in 1914 and has been the home playing field of the Cubs since 1916.

During games, the stadium is filled with Cubs fans, who are known for always cheering for their team, even if they are not winning. Even though the Cubs currently hold the record for the longest championship dry spell in all of American professional sports, their fans remain loyal to them.

The name "Billy Goat " comes from a bar known to reporters as Billy Goat's Tavern, located on lower Wacker drive in downtown Chicago. By the time the story of this "curse" started to get out, all the main characters were conveniently dead. The story is: During the 1945 World Series, a man by the name of Vasili "Billy Goat" Sianis attended Game 4 of the series with his pet goat. During the 7th inning of the game, the Stadium's security guards asked Sianis to leave the stadium because his goat was bothering other fans. Sianis became angry and cursed the Cubs, saying that they would never win a World Series as long as they played at Wrigley Field. Although the curse is often seen as a joke for most Cubs fans, some fans thought it could be the reason why the Cubs had not won a World Series title.

All content from Kiddle encyclopedia articles (including the article images and facts) can be freely used under Attribution-ShareAlike license, unless stated otherwise. Cite this article:
Chicago Cubs Facts for Kids. Kiddle Encyclopedia.