West Side Park facts for kids 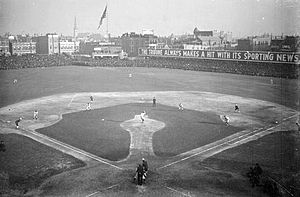 West Side Park is the name of a former baseball park in Chicago, Illinois. It was the home field of the Chicago Cubs baseball team from 1893 through 1915.

The park got its name from being located on the west side of Chicago. Where the ballpark once stood there is now a building in the University of Illinois Medical School.

All content from Kiddle encyclopedia articles (including the article images and facts) can be freely used under Attribution-ShareAlike license, unless stated otherwise. Cite this article:
West Side Park Facts for Kids. Kiddle Encyclopedia.