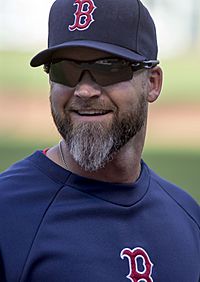 David Wade Ross (born March 19, 1977) is an American professional baseball manager and former catcher for the Chicago Cubs of Major League Baseball (MLB). He played for 15 years in MLB.

Ross played college baseball for Auburn University and the University of Florida. He was born in Bainbridge, Georgia and was raised in Tallahassee, Florida.

Ross had two World Series wins with the Boston Red Sox in 2013 and the Chicago Cubs in 2016. The Cubs named him their manager before the 2020 season.

All content from Kiddle encyclopedia articles (including the article images and facts) can be freely used under Attribution-ShareAlike license, unless stated otherwise. Cite this article:
David Ross (baseball) Facts for Kids. Kiddle Encyclopedia.