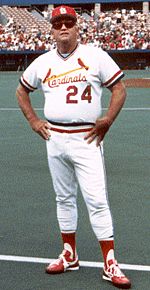 Whitey Herzog managed the St. Louis Cardinals in the 1980s

A manager is the head coach of a baseball team. His job is to tell the players on the team what to do and make decisions about how the team should play, like who will play in what position. In the past, managers were usually players. Since they were players, these managers wore the same uniform as the rest of the team. Managers who were not players, such as Connie Mack, would not be dressed in uniform. Today, managers dress in the same uniform as the team, even though most managers today are not players. Managers in Major League Baseball and for many other teams as well are usually former players themselves. Their playing experience may give them more knowledge on the game that they can use to help their team.

All content from Kiddle encyclopedia articles (including the article images and facts) can be freely used under Attribution-ShareAlike license, unless stated otherwise. Cite this article:
Manager (baseball) Facts for Kids. Kiddle Encyclopedia.