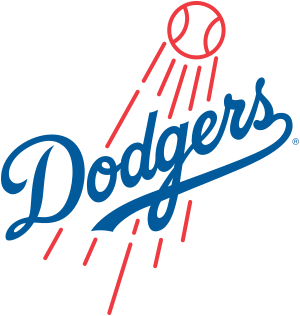 The Los Angeles Dodgers are a Major League Baseball team in Los Angeles, California, USA. The team plays in the West Division of the National League. The team began play in Brooklyn, New York, starting in 1883. The team had several informal nicknames over the years, including the "Atlantics", the "Bridegrooms", the "Superbas" and the "Robins". The name "Dodgers" was first used in the 1890s. It was short for "Trolley Dodgers".

The Brooklyn Dodgers played in several ballparks. The most famous of them was Ebbets Field, their home from 1913 through 1958. In 1959 they moved to Los Angeles. They played in the Los Angeles Memorial Coliseum for four years. In 1962 they opened Dodger Stadium, and have played there ever since.

Many famous baseball players have played for the Dodgers, including:

All content from Kiddle encyclopedia articles (including the article images and facts) can be freely used under Attribution-ShareAlike license, unless stated otherwise. Cite this article:
Los Angeles Dodgers Facts for Kids. Kiddle Encyclopedia.