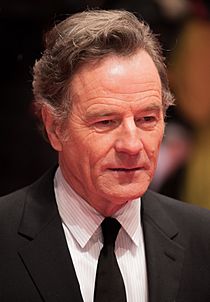 Cranston appeared in movies as well. He appeared in Saving Private Ryan, Little Miss Sunshine, Argo, Godzilla, as Dalton Trumbo in Trumbo, Kung Fu Panda 3, Why Him?, Zordon in Power Rangers and as Phillip Lacasse in The Upside.

Cranston was born on March 7, 1956 in Canoga Park, California. Cranston studied at Canoga Park High School and at the Los Angeles City College. Cranston was married to Mickey Middleton from 1977 until they divorced in 1982. He married Robin Dearden in 1989. With Dearden, he has a daughter.

All content from Kiddle encyclopedia articles (including the article images and facts) can be freely used under Attribution-ShareAlike license, unless stated otherwise. Cite this article:
Bryan Cranston Facts for Kids. Kiddle Encyclopedia.