Kids Encyclopedia Facts
This page is about the city. For the holding company, see Yucaipa Cos..

Yucaipa has the distinction of being the former, longtime home of a large population of Serrano Indians and was also known for being the home base of what is now Stater Bros. Markets (founded in 1936, and now headquartered in San Bernardino).

According to the United States Census Bureau, the city has a total area of 27.8 square miles (72 km2), with 0.04 percent being water.

According to the Köppen Climate Classification system, Yucaipa has a warm-summer Mediterranean climate, abbreviated "Csb" on climate maps.

According to the 2010 United States Census, Yucaipa had a median household income of $59,428, with 11.7% of the population living below the federal poverty line.

Prior to the Spanish conquest of the Americas and the arrival of European settlers from Mexico, the land of the Yucaipa Valley was occupied by the Serrano Indians for possibly 1,000 years.

Yucaipa Valley supported a large population of Serrano Indians. The fertile valley was watered by springs and creeks running out of the San Bernardino Mountains. The Serrano lived in this location most of the year, but would make excursions into the mountains to gather acorns and other food items during their harvest season. The Serrano name for the area was Yucaipat which meant "green valley." The Rancheria is marked by California Historical Landmark #620. 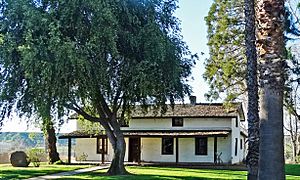 Near the Rancheria is the Yucaipa Adobe that is believed to be the oldest house in San Bernardino County. Diego Sepúlveda, nephew of Antonio María Lugo, built the Adobe in 1842 on land that was part of the Rancho San Bernardino granted in 1842 to the Lugos. It had formerly been land controlled by San Gabriel Mission. The Rancho suffered losses of cattle and horses from raids by Native Americans coming through Cajon Pass and Banning Pass from the deserts. Eventually, they sold the Rancho to Mormon settlers in September 1851. The Adobe's later owners included John Brown, Sr., James W. Waters, and the Dunlap family; it was acquired by San Bernardino County in 1955. The site is marked by California Historical Landmark #528.

The nearby Oak Glen area is best known for its apple orchards, some of which are operated by the direct descendants of the original founders (the Parrish, Wilshire, Rivers, and Law families). The Parrish Pioneer Ranch and orchard were founded by Enoch Parrish in 1876, with the other families coming into the area later.

In 1936, twin brothers Cleo and Leo Stater bought the W. A. Davis Market and started a new way of grocery shopping in the Inland Empire. They, along with their brother LaVoy, founded the Stater Bros. Markets chain. With 175 stores in the chain, it is now headquartered in a new 2,000,000 square feet (190,000 m2) facility in San Bernardino at the west end of San Bernardino International Airport). Stater Bros. stores are famous for their on-site butchers where customers can ask for special cuts of pork chops or spare ribs.

At 1:53 p.m. on June 16, 2005, Yucaipa experienced a 4.9 Mw earthquake that was centered four miles (6 km) north of the center of town. It had a maximum Mercalli intensity of VI (Strong) and was felt from downtown Los Angeles to some areas of San Diego. Three people were injured.

In a controversial effort to reinvigorate the struggling downtown Yucaipa area, the city has taken on multiple uptown boulevard improvements:

Uptown Yucaipa Boulevard Improvements, 2nd Street to Bryant Street (Phase 2B)
This phase of the project, funded by Redevelopment Agency (1998, 2004 and 2010/11) Tax Allocation Bond funds and Pavement Management Program funds will complete street, drainage, hardscape, parallel on-street parking and reverse angle parking improvements on Yucaipa Boulevard between Bryant Street and 2nd Street. The project also includes intersection improvements, replacing the existing traffic signals at the intersections of Yucaipa Boulevard at 2nd Street and California Street with roundabouts, associated hardscape and landscape features. Pedestrian improvements, including sidewalk, ADA curb ramps, crosswalks, street light foundations and associated signing and striping are also incorporated into the project. This project will be completed April 2012. Uptown Yucaipa Boulevard Improvements, 2nd Street to Bryant Street (Phase 2C & 2D) This project, ultimately funded the same as Phase 2B above, will provide decorative street light pole fixtures fitted with banners, speakers, video cameras (at limited locations), receptacles, and hanging baskets, lighted bollards, and the infrastructure, such as conduit, wiring and power source pedestals, required to support the project. Phase 2D will provide landscaping in the planters including trees (with accent lighting), shrubs and wood chips along with the necessary irrigation, wiring, water meter and control systems necessary to support the landscaping and outdoor speakers for the sound system. This project is underway and should be completed April 2012.

Uptown Decorative Metal Archway
This project is also funded by Redevelopment Agency (1998, 2004 and 2010/11) Tax Allocation Bond funds and Pavement Management Program funds and will install the Decorative Metal Archway immediately west of the 2nd Street Roundabout on Yucaipa Boulevard. This project is underway and was scheduled to be completed April 2012.

Uptown Decorative Metal Fence Fabrication and Installation
This phase of the Uptown Streetscape Project is also funded by Redevelopment Agency (1998, 2004 and 2010/11) Tax Allocation Bond funds and Pavement Management Program funds and will install a decorative metal fence in the roundabout areas at 2nd Street and California Street and Yucaipa Boulevard.

All content from Kiddle encyclopedia articles (including the article images and facts) can be freely used under Attribution-ShareAlike license, unless stated otherwise. Cite this article:
Yucaipa, California Facts for Kids. Kiddle Encyclopedia.