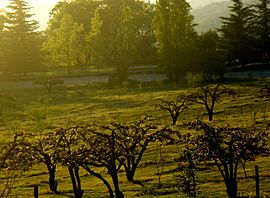 One of Oak Glen's apple orchards

The original settlers, the Cahuilla and the Serrano, harvested acorns; many metates can still be found in the streambeds where the acorns were leached. According to Huell Howser's 2005 California's Gold profile, the potato was the original crop grown by the first Caucasians to settle in the area.

The apple orchards produce the Vasquez and King David varieties, which are grown only in Oak Glen, as well as antique varieties no longer commercially available such as Ben Davis, Gravenstein, and Pink Pearl.

Although Oak Glen grew apples mainly for export, in the 1940s several farms began to sell apples, apple pies, apple cider and apple butter at roadside stands. The export trade has virtually disappeared, and growers now earn much of their revenue from visitors who are allowed to pick apples directly off the trees at some of the orchards.

One of the most scenic historic spots in Southern California is nestled in the heart of Apple Country in Oak Glen, California where the summers are cooler and the winters dusted with snow. The five mile scenic loop of 30+ ranches, farms and businesses are open year-round. You will see one of the most scenic byways Southern California has to offer. Enoch Parrish opened the first apple orchard in 1876, followed by the Wilshire family. The Rivers brothers and their families came to Oak Glen in 1906. Their orchard, Los Rios Rancho (Spanish for "The Rivers Ranch"), is still in operation, as are many of the other original orchards and ranches in the area. The Law family came into the area with its own apple orchard in the early 1930s and built the first roadside packinghouse, first restaurant and gift shop soon after. Various other shops. In 1996 a wildland trust came to Oak Glen and offers a picnicking area and hiking trails, as well as many special activities that makes Oak Glen appealing to virtually everyone. A large number of families make a visit to Oak Glen for a number of festivities and events. Los Rios Rancho a 103-year-old ranch; Southern California's largest historical apple ranch, located in the heart of apple country, draws more than 300,000 visitors yearly make the scenic drive to Oak Glen to pick apples, picnic and hike as well as enjoy the homemade apple pies and freshly pressed cider. Joseph E. Wilshire, who helped make the Oak Glen area famous for apple growing in the early 1900s had realized early on the suitability of The Glen for growing bountiful apples and began buying land where with his brothers George, Henry and Edward began the Wilshire legacy. The original settlers to Oak Glen were the Cahuilla and the Serrano. They harvested acorns for survival in Oak Glen. The unique climate and elevation was perfect for growing large black acorns, a favorite among the locals. The evidence can still be found along the streambeds where the acorns were leached over 100 years ago. Although the main crop of Oak Glen was apples since the 1940s, it hasn’t always been Oak Glen’s only crop. The potato along with many other crops, were grown in Oak Glen since the 1890s. After several farms began to sell apples individually to visitors, along with homemade apple pies, fresh apple cider and delicious apple butter from roadside stands Oak Glen became an apple boom town overnight. The export trade has since virtually disappeared, and growers now earn much of their revenue from visitors who are allowed to pick the apples directly from the trees to insure freshness and the best quality. Today many of the heirloom varieties still exist today even though many of them have been since lost in time. Such varieties, which are grown only in Oak Glen, as well as many heirloom varieties no longer commercially available or are hard to find, such as the Arkansas Black and the Glen Seedling favorites among many. According to the Los Angeles Times, the town in Tamara Thorne's horror novel Moonfall is based on Oak Glen.

According to the 2010 United States Census, Oak Glen had a median household income of $70,189, with none of the population living below the federal poverty line.

All content from Kiddle encyclopedia articles (including the article images and facts) can be freely used under Attribution-ShareAlike license, unless stated otherwise. Cite this article:
Oak Glen, San Bernardino County, California Facts for Kids. Kiddle Encyclopedia.