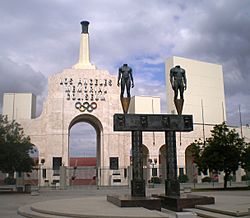 The Los Angeles Memorial Coliseum is a sports stadium in Los Angeles, California. It was built in 1923. It has hosted many different sporting events. In 1932 and 1984, it hosted the track events and ceremonies of the Olympic Games.

In football, it used to be the stadium of the Chargers, Raiders and Rams before they moved to other cities. The University of Southern California, which is across the street, has played in the Coliseum for many years, and UCLA played there for several years as well. The Coliseum hosted two Super Bowls and 20 Pro Bowls, or NFL All-Star Games. On January 13, 2016, the Rams relocated back to Los Angeles. They will play at the Coliseum until their new stadium is built for the 2019 season.

The Los Angeles Dodgers played in the Coliseum for four years before Dodger Stadium was built. While there, they won a World Series and set records for most people at a baseball game.

All content from Kiddle encyclopedia articles (including the article images and facts) can be freely used under Attribution-ShareAlike license, unless stated otherwise. Cite this article:
Los Angeles Memorial Coliseum Facts for Kids. Kiddle Encyclopedia.