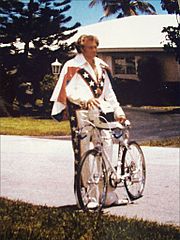 Evel Knievel (October 17, 1938 – November 30, 2007), born Robert Craig Knievel, was an American daredevil and entertainer. Knievel is known for trying to do more than 75 ramp-to-ramp motorcycle jumps between 1965 and 1980, and in 1974, a failed jump across Snake River Canyon in Idaho in the Skycycle, a steam-powered rocket. He has broken 433 bones during his career which earned him a title in the Guinness Book of Records as the survivor of "most bones broken in a lifetime".

All content from Kiddle encyclopedia articles (including the article images and facts) can be freely used under Attribution-ShareAlike license, unless stated otherwise. Cite this article:
Evel Knievel Facts for Kids. Kiddle Encyclopedia.