Caesars Palace is a luxury hotel and casino on the Las Vegas Strip in Paradise, Nevada. Caesars Palace is owned and operated by Caesars Entertainment Corp. Caesars is on the west side of the Strip, between the Bellagio and the Mirage.

Caesars has 3,960 rooms. There are five towers in the hotel: Augustus, Centurion, Roman, Palace, Octavius and Forum. The Forum tower features guest suites with 1,000 square feet (93 m2) of space. It is the only venue in Las Vegas to host a World Series of Poker Circuit Event. 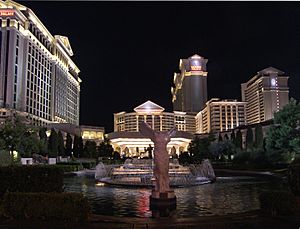 The Caesars Palace main fountain. The statue is of the Winged Victory of Samothrace.

All content from Kiddle encyclopedia articles (including the article images and facts) can be freely used under Attribution-ShareAlike license, unless stated otherwise. Cite this article:
Caesars Palace Facts for Kids. Kiddle Encyclopedia.