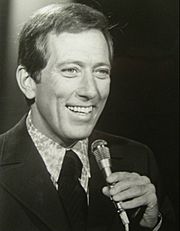 He recorded 43 albums in his career, of which 15 have been gold-certified and three platinum-certified. He was also nominated for six Grammy Awards.

The Moon River Theatre in Branson, Missouri, is named after the song he is most known for singing—Johnny Mercer and Henry Mancini's "Moon River". He sold more than 100 million records worldwide, including 10.5 million certified units in the United States.

In November 2011, Williams was diagnosed with bladder cancer. Williams died on September 25, 2012 in Branson, Missouri from the cancer, aged 84.

All content from Kiddle encyclopedia articles (including the article images and facts) can be freely used under Attribution-ShareAlike license, unless stated otherwise. Cite this article:
Andy Williams Facts for Kids. Kiddle Encyclopedia.