Koi are a colored varieties of Amur carp that are kept for decorative purposes in outdoor koi ponds or water gardens. Several varieties are recognized by the Japanese. Koi varieties are distinguished by coloration, patterning, and scales. Some of the major colors are white, black, red, orange, yellow, blue, and cream. The most popular category of koi is the Gosanke, which is made up of the Kohaku, Taisho Sanshoku, and Showa Sanshoku varieties.

New koi varieties are still being actively developed. Ghost koi developed in the 1980s have become very popular in the United Kingdom and are distinguished by their metallic scales. Butterfly koi (also known as longfin koi, or dragon carp), also developed in the 1980s, are notable for their long and flowing fins. 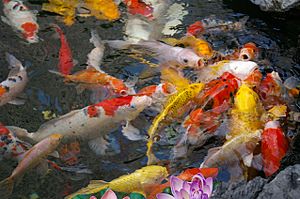 Carp are a large group of fish originally found in Central Europe and Asia. Various carp species were originally domesticated in East Asia, where they were used as food fish. Carp are coldwater fish, and their ability to survive and adapt to many climates and water conditions allowed the domesticated species to be propagated to many new locations, including Japan.

Natural color mutations of these carp would have occurred across all populations. Carp were first bred for color mutations in China more than a thousand years ago, where selective breeding of the Prussian carp led to the development of the goldfish. 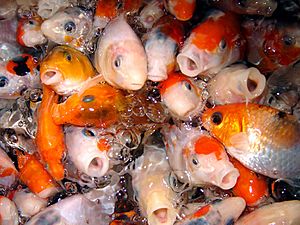 The hobby of keeping koi eventually spread worldwide. They are now sold in many pet aquarium shops, with higher-quality fish available from specialist dealers. The collection of koi throughout the years has become quite the social hobby for many who have ponds. It is also common for hobbyists who are passionate about their koi to join a club specifically for their koi and ponds. Members tend to share their knowledge of the fish with others and even help each other out when they are in need of help with their koi. 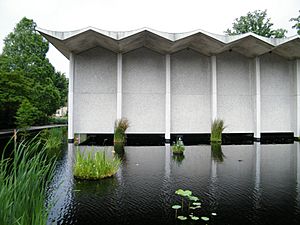 The common carp is a hardy fish, and koi retain that durability. The bright colors of koi put them at a severe disadvantage against predators; a white-skinned Kohaku is a visual dinner bell against the dark green of a pond. Herons, kingfishers, otters, raccoons, cats, foxes, badgers, and hedgehogs are all capable of emptying a pond of its fish.

A well-designed outdoor pond has areas too deep for herons to stand, overhangs high enough above the water that mammals cannot reach in, and shade trees overhead to block the view of aerial passers-by. It may prove necessary to string nets or wires above the surface. A pond usually includes a pump and filtration system to keep the water clear. 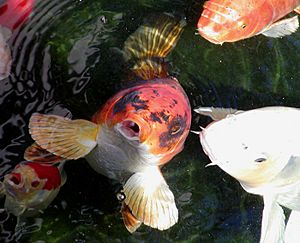 Koi waiting to be fed

Koi are an omnivorous fish. They eat a wide variety of foods, including peas, lettuce, and watermelon. Koi food is designed not only to be nutritionally balanced, but also to float so as to encourage them to come to the surface. When they are eating, koi can be checked for parasites and ulcers. Naturally, koi are bottom feeders with a mouth configuration adapted for that. Some koi have a tendency to eat mostly from the bottom, so food producers create a mixed sinking and floating combination food. Koi recognize the persons feeding them and gather around them at feeding times. They can be trained to take food from one's hand.

Koi have been reported to achieve ages of 100–200 years. One famous scarlet koi named "Hanako" was owned by several individuals, the last of whom was Komei Koshihara. In July 1974, a study of the growth rings of one of the koi's scales reported that Hanako was 226 years old. 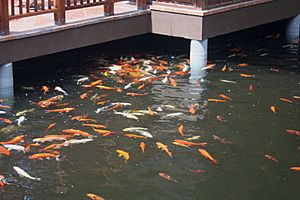 Koi have been accidentally or deliberately released into the wild in every continent except Antarctica. They quickly revert to the natural coloration of common carp within a few generations. In many areas, they are considered an invasive species and pests. In the state of Queensland in Australia, they are considered noxious fish.

Koi greatly increase the turbidity of the water because they are constantly stirring up the different layers. This makes waterways unattractive, reduces the abundance of aquatic plants, and can render the water unsuitable for swimming or drinking, even by livestock. In some countries, koi have caused so much damage to waterways that vast amounts of money and effort have been spent trying to eradicate them, largely unsuccessfully.

In many areas of North America, koi are introduced into the artificial "water hazards" and ponds on golf courses to keep water-borne insect larvae under control. 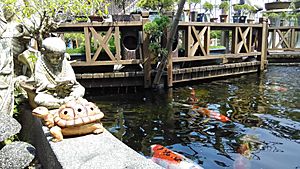 The koi fish is symbolic in Japanese culture and is closely associated with the country's national identity. The koi fish is a symbol of luck, prosperity, and good fortune in Japan.

In Sri Lanka, interior courtyards most often have one or several fish ponds dedicated to koi fish. Sri Lanka is the sixth largest cultivator of ornamental fish in the world after Singapore, Hong Kong, Malaysia, Thailand and the Philippines.

All content from Kiddle encyclopedia articles (including the article images and facts) can be freely used under Attribution-ShareAlike license, unless stated otherwise. Cite this article:
Koi Facts for Kids. Kiddle Encyclopedia.