Badgers have wide bodies, with short legs for digging. They have long weasel-like heads with small ears. Their tails vary in length depending on species. They have black faces with white markings and grey bodies with a light-coloured stripe from head to tail. They have dark legs with light coloured underbellies. They grow to around 90 centimetres (35 in) in length including the tail. The European badger is one of the largest badgers. The American badger, the hog badger and the honey badger are a little smaller and lighter. They weigh around 9.1–11 kg (20–24 lb) on average, with some badgers in Europe and Asia weighing about 18 kg (40 lb)

Badgers all live underground. They live in burrows called setts, which may be very large. Some live on their own, moving from home to home. Others are known to form family groups called cetes. Between two and fifteen badgers can live in a cete at one time. Badgers can run or gallop at speeds of up to 25–30 km/h (16–19 mph) for short periods of time. Badgers are only active at night. They can dig a hole fast enough to escape most predators. They fill in the hole behind them as they dig.

The diet of the Eurasian badger consists largely of earthworms (especially Lumbricus terrestris), insects, grubs, and the eggs and young of ground-nesting birds. They also eat small mammals, amphibians, reptiles and birds, as well as roots and fruit. In Britain, they are the main predator of hedgehogs, which have demonstrably lower populations in areas where badgers are numerous, so that hedgehog rescue societies do not release hedgehogs into known badger territories. In some areas they are known to prey on lambs, and may bite a ewe defending her lamb, almost always leading to infection of the bite. They are occasional predators of domestic chickens, and are able to break into enclosures that a fox cannot. In southern Spain, badgers feed to a significant degree on rabbits.

American badgers are fossorial carnivores – i.e. they catch a significant proportion of their food underground, by digging. They can tunnel after ground-dwelling rodents at speed.

The honey badger of Africa consumes honey, porcupines, and even venomous snakes (such as the puff adder); they climb trees to gain access to honey from bees' nests.

Badgers have been known to become intoxicated with alcohol after eating rotting fruit.

Hunting badgers for sport has been common in many countries. The Dachshund (German for "badger hound") dog breed was bred for the purpose. Badger-baiting was formerly a popular blood sport. Although badgers are normally quite docile, they fight fiercely when cornered. This led people to capture and box badgers and then wager on whether a dog could succeed in removing the badger from its refuge. In England, opposition from naturalists and moral crusaders led to its ban under the Cruelty to Animals Act of 1835 and the Protection of Badgers Act of 1992 made it an offence to kill, injure, or take a badger or to interfere with a sett unless under license from a statutory authority. The Hunting Act of 2004 further banned fox hunters from blocking setts during their chases. 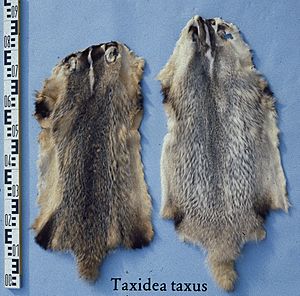 Badgers have been trapped commercially for their pelts, which have been used for centuries to make shaving brushes, a purpose to which it is particularly suited owing to its high water retention. Virtually all commercially available badger hair now comes from mainland China, though, which has farms for the purpose. The Chinese supply three grades of hair to domestic and foreign brush makers. Village cooperatives are also licensed by the national government to hunt and process badgers to avoid their becoming a crop nuisance in rural northern China. The European badger is also used as trim for some traditional Scottish clothing. The American badger is also used for paintbrushes and as trim for some Native American garments. It has also been occasionally used for doll hair.

Controlling the badger population is prohibited in many European countries, as badgers are listed in the Berne Convention, but they are not otherwise the subject of any international treaty or legislation. Many badgers in Europe were gassed during the 1960s and 1970s to control rabies.

Until the 1980s, badger culling in the United Kingdom was undertaken in the form of gassing, to control the spread of bovine tuberculosis (bTB). Limited culling resumed in 1998 as part of a 10-year randomised trial cull which was considered by John Krebs and others to show that culling was ineffective. Some groups called for a selective cull, while others favoured a programme of vaccination. Wales and Northern Ireland are currently (2013) conducting field trials of a badger vaccination programme. In 2012, the government authorised a limited cull led by the Department for Environment, Food and Rural Affairs, however, this was later deferred with a wide range of reasons given. In August 2013, a full culling programme began where it is expected about 5,000 badgers will be killed over six weeks in West Somerset and Gloucestershire using a mixture of controlled shooting and free shooting (some badgers will be trapped in cages first). The cull has caused many protests with emotional, economic and scientific reasons being cited. The badger is considered an iconic species of the British countryside, it has been claimed by shadow ministers that "The government's own figures show it will cost more than it saves...", and Lord Krebs, who led the Randomised Badger Culling Trial in the 1990s, said the two pilots "will not yield any useful information".

Although rarely eaten today in the United States or the United Kingdom, Badgers were also eaten in Britain during World War II and the 1950s. In Russia, the consumption of badger meat is still widespread. Shish kebabs made from badger, along with dog meat and pork, are a major source of trichinosis outbreaks in the Altai Region of Russia. In Croatia, badger meat is rarely eaten. When it is, it is usually smoked and dried, or less commonly, served in goulash. In France, badger meat was used in the preparation of several dishes, such as Blaireau au sang, and it was a relatively common ingredient in countryside cuisine. Badger meat was eaten in some parts of Spain until recently. In Japan, badger is regarded in folktales as a food for the humble.

Badgers can be tamed and then kept as pets. Keeping a badger as a pet or offering one for sale is an offence in the United Kingdom under the 1992 Protection of Badgers Act.

All content from Kiddle encyclopedia articles (including the article images and facts) can be freely used under Attribution-ShareAlike license, unless stated otherwise. Cite this article:
Badger Facts for Kids. Kiddle Encyclopedia.