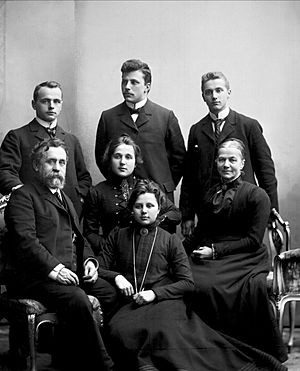 A family is a group of people who, in most cases, live together. They share their money and food and are supposed to take care of one another. Its members are either genetically related (like brother and sister) or legally bound to each other, for example by marriage. In many cultures, the members of a family have the same or a similar surname.

A family is said to be society´s smallest unit, its nucleus. 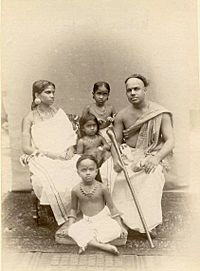 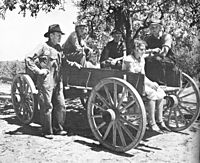 A first-degree relative is one who shares 50% of your DNA through direct inheritance, such as a full sibling, parent or progeny. 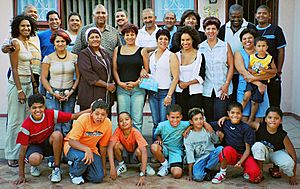 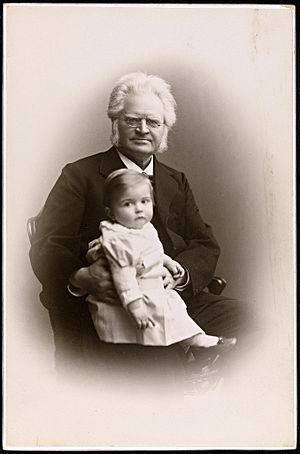 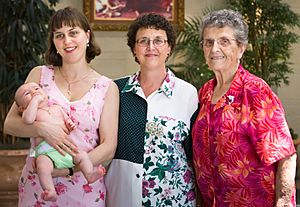 An infant, his mother, his maternal grandmother, and his great-grandmother 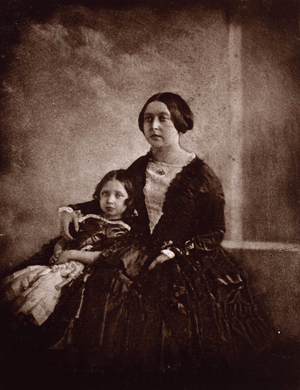 Queen Victoria, with her eldest daughter 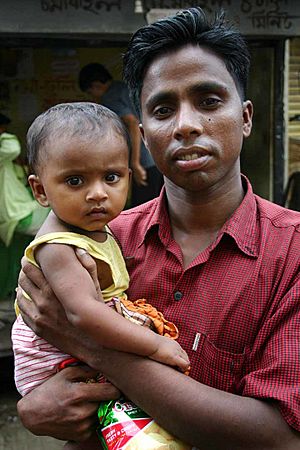 Such systems generally assume that the mother's husband is also the biological father. In some families, a woman may have children with more than one man or a man may have children with more than one woman. The system refers to a child who shares only one parent with another child as a "half-brother" or "half-sister". For children who do not share biological or adoptive parents in common, English-speakers use the term "stepbrother" or "stepsister" to refer to their new relationship with each other when one of their biological parents marries one of the other child's biological parents. Any person (other than the biological parent of a child) who marries the parent of that child becomes the "stepparent" of the child, either the "stepmother" or "stepfather". The same terms generally apply to children adopted into a family as to children born into the family. In the United States, one in five mothers have children by different fathers; among mothers with two or more children the figure is higher, with 28% having children with at least two different men. Such families are more common among Blacks and Hispanics, and among the lower socioeconomic class.

When additional generations intervene (in other words, when one's collateral relatives belong to the same generation as one's grandparents or grandchildren), the prefixes "great-" or "grand-" modifies these terms. Also, as with grandparents and grandchildren, as more generations intervene the prefix becomes "great-grand-," adding another "great-" for each additional generation. Most collateral relatives have never had membership of the nuclear family of the members of one's own nuclear family.

Cousins of an older generation (in other words, one's parents' first cousins), although technically first cousins once removed, are often classified with "aunts" and "uncles." Similarly, a person may refer to close friends of one's parents as "aunt" or "uncle," or may refer to close friends as "brother" or "sister," using the practice of fictive kinship. English-speakers mark relationships by marriage (except for wife/husband) with the tag "-in-law." The mother and father of one's spouse become one's mother-in-law and father-in-law; the female spouse of one's child becomes one's daughter-in-law and the male spouse of one's child becomes one's son-in-law. The term "sister-in-law" refers to three essentially different relationships, either the wife of one's sibling, or the sister of one's spouse, or, in some uses, the wife of one's spouse's sibling. "Brother-in-law" expresses a similar ambiguity. The terms "half-brother" and "half-sister" indicate siblings who share only one biological or adoptive parent.

Patrilineality, also known as the male line or agnatic kinship, is a form of kinship system in which an individual's family membership derives from and is traced through his or her father's lineage. It generally involves the inheritance of property, rights, names, or titles by persons related through male kin.

A patriline ("father line") is a person's father, and additional ancestors that are traced only through males. One's patriline is thus a record of descent from a man in which the individuals in all intervening generations are male. In cultural anthropology, a patrilineage is a consanguineal male and female kinship group, each of whose members is descended from the common ancestor through male forebears.

Matrilineality is a form of kinship system in which an individual's family membership derives from and is traced through his or her mother's lineage.

It may also correlate with a societal system in which each person is identified with their matriline—their mother's lineage—and which can involve the inheritance of property and titles. A matriline is a line of descent from a female ancestor to a descendant in which the individuals in all intervening generations are mothers - in other words, a "mother line".

Bilateral descent is a form of kinship system in which an individual's family membership derives from and is traced through both the paternal and maternal sides. The relatives on the mother's side and father's side are equally important for emotional ties or for transfer of property or wealth. It is a family arrangement where descent and inheritance are passed equally through both parents. Families who use this system trace descent through both parents simultaneously and recognize multiple ancestors, but unlike with cognatic descent it is not used to form descent groups.

Traditionally, this is found among some groups in West Africa, India, Australia, Indonesia, Melanesia, Malaysia and Polynesia. Anthropologists believe that a tribal structure based on bilateral descent helps members live in extreme environments because it allows individuals to rely on two sets of families dispersed over a wide area.

All content from Kiddle encyclopedia articles (including the article images and facts) can be freely used under Attribution-ShareAlike license, unless stated otherwise. Cite this article:
Family Facts for Kids. Kiddle Encyclopedia.