Kids Encyclopedia Facts
This page is about the mammals called "moles". For other uses, see Mole (disambiguation).
Not to be confused with vole, a small mouse-like rodent.

The term mole is especially and most properly used for "true moles" of the family Talpidae in the order Eulipotyphla, which are found in most parts of North America, Europe and Asia, although it may also refer to unrelated mammals of Australia and southern Africa that have convergently evolved the "mole" body plan.

Moles are known pests to human activities such as agriculture, lawncare, and gardening. They do not eat plant roots, but cause damage indirectly by eating earthworms and other small invertebrates in the soil. While moles may be viewed as pests, they do provide many positive contributions to the soil, gardens, and ecosystem, including soil aeration, feeding on slugs and other small creatures that do eat plant roots, and providing prey for other wildlife.

In Middle English, moles were known as moldwarp. The expression "don't make a mountain out of a molehill" (which means "exaggerating problems") was first recorded in Tudor times. By the era of Early Modern English, the mole was also known in English as mouldywarp, a word having cognates in other Germanic languages such as German (Maulwurf), and Danish, Norwegian, Swedish and Icelandic (muldvarp, mullvad, moldvarpa), where the muld/mull/mold part of the word means soil and the varp/vad/varpa part means throw, hence "one who throws soil" or "dirt tosser".

Moles have been found to tolerate higher levels of carbon dioxide than other mammals, because their blood cells have a special form of hemoglobin that has a higher affinity to oxygen than other forms. In addition to this, moles utilize oxygen more effectively by reusing the exhaled air, and as a result, are able to survive in low-oxygen environments such as burrows. 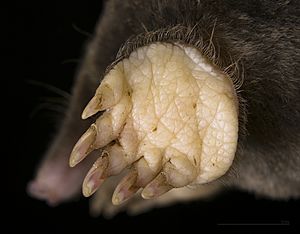 Moles have polydactyl forepaws; each has an extra thumb (also known as a prepollex) next to the regular thumb. While the mole's other digits have multiple joints, the prepollex has a single, sickle-shaped bone that develops later and differently from the other fingers during embryogenesis from a transformed sesamoid bone in the wrist, independently evolved but similar to the giant panda thumb. This supernumerary digit is species-specific, as it is not present in shrews, the mole's closest relatives. Androgenic steroids are known to affect the growth and formation of bones, and a connection is possible between this species-specific trait and the "male" genital apparatus in female moles of many mole species (gonads with testicular and ovary tissues).

A mole's diet primarily consists of earthworms and other small invertebrates found in the soil. The mole runs are in reality "worm traps", the mole sensing when a worm falls into the tunnel and quickly running along to kill and eat it. Because their saliva contains a toxin that can paralyze earthworms, moles are able to store their still-living prey for later consumption. They construct special underground "larders" for just this purpose; researchers have discovered such larders with over a thousand earthworms in them. Before eating earthworms, moles pull them between their squeezed paws to force the collected earth and dirt out of the worm's gut.

The star-nosed mole can detect, catch and eat food faster than the human eye can follow.

Breeding season for a mole depends on species, but is generally February through May. Males search for females by letting out high-pitched squeals and tunneling through foreign areas.

The gestation period of the Eastern (North America) mole (Scalopus aquaticus) is approximately 42 days. Three to five young are born, mainly in March and early April.

Townsend moles mate in February and March, and the 2–4 young are born in March and April after a gestation period of about 1 month. The Townsend mole is endangered in the United States and Canada.

Coast moles produce a litter of 2–5 pups between March and April.

Pups leave the nest 30–45 days after birth to find territories of their own.

Allegedly moles are solitary creatures, coming together only to mate. Territories may overlap, but moles avoid each other and males may fight fiercely if they meet. 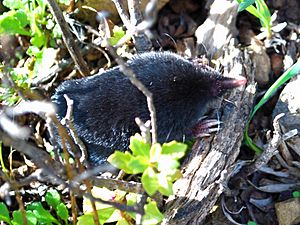 The family Talpidae contains all the true moles and some of their close relatives. Desmans, which are Talpidae but are not normally called "moles", are not shown below, but belong to the subfamily Talpinae (note the slightly different name). Those species called "shrew moles" represent an intermediate form between the moles and their shrew ancestors, and as such may not be fully described by the article.

On the other hand, there is no monophyletic relation between the mole and the hedgehog, both of which were previously placed in the now-abandoned order Insectivora. As a result, Eulipotyphla (shrew-like animals, including moles), previously within Insectivora, has been elevated to the level of an order.

While many groups of burrowing animals (pink fairy armadillos, tuco-tucos, mole rats, mole crickets, and mole crabs) have developed close physical similarities with moles due to convergent evolution, two of these are so similar to true moles, they are commonly called and thought of as "moles" in common English, although they are completely unrelated to true moles or to each other. These are the golden moles of southern Africa and the marsupial moles of Australia. While difficult to distinguish from each other, they are most easily distinguished from true moles by shovel-like patches on their noses, which they use in tandem with their abbreviated forepaws to swim through sandy soils.

The golden moles belong to the same branch on the phylogenetic tree as the tenrecs, called Tenrecomorpha, which, in turn, stem from a main branch of placental mammals called the Afrosoricida. This means that they share a closer common ancestor with such existing afrosoricids as elephants, manatees and aardvarks than they do with other placental mammals, such as true Talpidae moles. 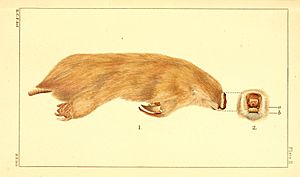 As marsupials, these moles are even more distantly related to true talpid moles than golden moles are, both of which belong to the Eutheria, or placental mammals. This means that they are more closely related to such existing Australian marsupials as kangaroos or koalas, and even to a lesser extent to American marsupials, such as opossums, than they are to placental mammals, such as golden or Talpidae moles. 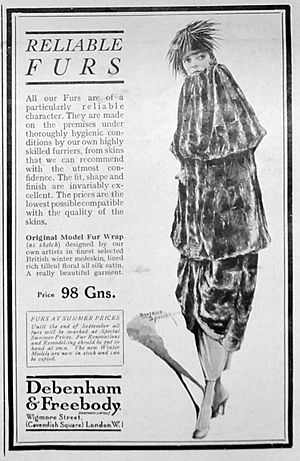 Moles' pelts have a velvety texture not found in surface animals. Surface-dwelling animals tend to have longer fur with a natural tendency for the nap to lie in a particular direction, but to facilitate their burrowing lifestyle, mole pelts are short and very dense and have no particular direction to the nap. This makes it easy for moles to move backwards underground, as their fur is not "brushed the wrong way". The leather is extremely soft and supple. Queen Alexandra, the wife of Edward VII of the United Kingdom, ordered a mole-fur garment to start a fashion that would create a demand for mole fur, thereby turning what had been a serious pest problem in Scotland into a lucrative industry for the country. Hundreds of pelts are cut into rectangles and sewn together to make a coat. The natural color is taupe, (derived from the French noun taupe meaning mole) but it is readily dyed any color. 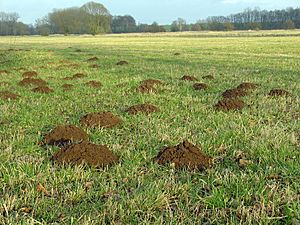 Moles are considered agricultural pests in some countries, while in others, such as Germany, they are a protected species, but may be killed with a permit. Problems cited as caused by moles include contamination of silage with soil particles, making it unpalatable to livestock, the covering of pasture with fresh soil reducing its size and yield, damage to agricultural machinery by the exposure of stones, damage to young plants through disturbance of the soil, weed invasion of pasture through exposure of freshly tilled soil, and damage to drainage systems and watercourses. Other species such as weasels and voles may use mole tunnels to gain access to enclosed areas or plant roots. 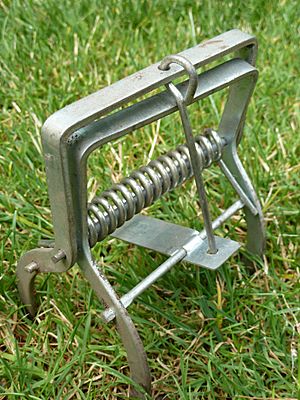 Moles are controlled with traps such as mole-catchers, smoke bombs, and poisons such as calcium carbide, which produces acetylene gas to drive moles away. Strychnine was also used for this purpose in the past. The most common method now is Phostoxin or Talunex tablets. They contain aluminium phosphide and are inserted in the mole tunnels, where they turn into phosphine gas (not be confused with phosgene gas). More recently, high-grade nitrogen gas has proven effective at killing moles, with the added advantage of having no polluting effect to the environment.

Other common defensive measures include cat litter and blood meal, to repel the mole, or smoking its burrow. Devices are also sold to trap the mole in its burrow, when one sees the "mole hill" moving and therefore knows where the animal is, and then stabbing it.

Other humane options are also possible including humane traps that capture the mole alive so it may be transported elsewhere. In many contexts including ordinary gardens, the damage caused by moles to lawns is mostly visual, and it is possible instead of extermination to simply remove the earth of the molehills as they appear, leaving their permanent galleries for the moles to continue their existence underground. However, when the tunnels are near the surface in soft ground or after heavy rain, they may collapse, leaving (small) unsightly furrows in the lawn.

William Buckland, known for eating every animal he could, opined that mole meat tasted vile.

The mole in prophetic literature

According to the first prophecy of the 'Six Kings to follow King John', written about 1312, the six kings could be likened to animals. The sixth king after John would be the Mouldwarp or Mole, who would be proud, contemptible and cowardly, having a skin like a goat. The prophecy gained popularity during the 14th century and was used by the enemies of Henry IV alluded to by Shakespeare in Henry IV, Part 1. It was again used during the disturbances leading to the Pilgrimage of Grace 1535-7 but this time was applied by the rebels to Henry VIII.de:Maulwürfe eo:Talpo

All content from Kiddle encyclopedia articles (including the article images and facts) can be freely used under Attribution-ShareAlike license, unless stated otherwise. Cite this article:
Mole (animal) Facts for Kids. Kiddle Encyclopedia.