The giant panda, Ailuropoda melanoleuca, is a bear. It lives in south central China.

Although it belongs to the order Carnivora, the panda's diet is 99% bamboo. Pandas in the wild occasionally eat other grasses, wild tubers, or even meat in the form of birds, rodents or carrion. In captivity, they may get honey, eggs, fish, yams, shrub leaves, oranges, or bananas along with specially prepared food.

The giant panda lives in a few mountain ranges in central China, mainly in Sichuan province, but also in the Shaanxi and Gansu provinces. As a result of farming, deforestation and other development, the panda has been driven out of the lowland areas where it once lived.

The giant panda has a body shape typical of bears. It has black fur on its ears, eye patches, muzzle, legs, arms and shoulders. The rest of the animal's coat is white. Although scientists do not know why these unusual bears are black and white, speculation suggests that the bold coloring provides effective camouflage in their shade-dappled snowy and rocky habitat. The giant panda's thick, wooly coat keeps it warm in the cool forests of its habitat. It has large molar teeth and strong jaw-muscles for crushing tough bamboo. 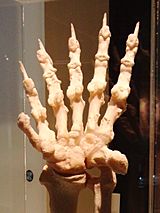 Bones of the left forelimb of a giant panda at the National Museum of Nature and Science, Tokyo, Japan.

The giant panda's paw has a "thumb" and five fingers; the "thumb" - actually a modified sesamoid bone - helps it to hold bamboo while eating. Stephen Jay Gould discusses this feature in his book of essays on evolution and biology, The Panda's Thumb.

The giant panda's tail, measuring 10 to 15 cm (4 to 6 in), is the second-longest in the bear family. (The longest belongs to the sloth bear.)

The giant panda typically lives around 20 years in the wild and up to 30 years in captivity. The oldest captive, a female named Ming Ming, had a recorded age of 34.

In the wild, the giant panda is a terrestrial animal and primarily spends its life roaming and feeding in the bamboo forests of the Qinling Mountains and in the hilly Sichuan Province.

Giant pandas are generally solitary, and each adult has a defined territory, and a female is not tolerant of other females in her range.

Pandas communicate through vocalization and scent marking such as clawing trees or spraying urine.

They are able to climb and take shelter in hollow trees or rock crevices, but do not establish permanent dens. For this reason, pandas do not hibernate, which is similar to other subtropical mammals, and will instead move to elevations with warmer temperatures.

Social encounters occur primarily during the brief breeding season in which pandas in proximity to one another will gather. After mating, the male leaves the female alone to raise the cub.

Though the panda is often assumed to be docile, it has been known to attack humans, presumably out of irritation rather than aggression.

Bamboo is the main diet of panda . Ninety-nine percent of the food they eat is bamboo. They eat as much as 40 pounds (18 kg) of bamboo every day. They spend 10 to 16 hours every day looking for food and eating it.

There are two kinds of giant panda. They both live in China. The best known is the black and white panda. Its scientific name is Ailuropoda melanoleuca melanoleuca.

The other giant panda has dark brown and light brown fur. Its skull is smaller than the other giant panda. It has larger molars. This panda lives only in the Qinling Mountains. Its scientific name is Ailuropoda melanoleuca qinlingensis. 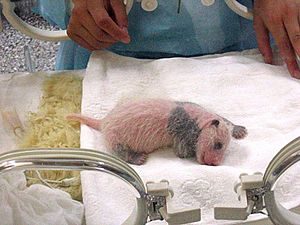 Giant pandas are ready to have babies (cubs) when they are between the ages of four and eight years. They may be able to have babies until about age 20. Female pandas are ready to have a baby only once a year. This is in the springtime. There are only two to three days she is ready for a baby. Calls and scents bring the males and female pandas to each other.

Female pandas may give birth to two young. Usually only one lives. Giant panda cubs may stay with their mothers for up to three years. Then they leave her for a life of their own.

People outside of eastern Asia did not know about the giant panda until 1869. The first "Westerner" to see a live panda was a German zoologist in 1916. In 1936, Ruth Harkness became the first Westerner to bring a live giant panda out of China. It was a cub (baby panda) named Su-Lin. The cub was taken to live at the Brookfield Zoo in Chicago.

In the 1970s, China began showing giant pandas in zoos in the United States and Japan as a type of diplomacy. This happened until 1984, when China changed how this was done. Starting in 1984, China would allow zoos to keep the giant pandas for 10 years, but the zoo would have to pay China up to $1,000,000 each year. Also, the zoo would have to agree that any cubs born would belong to China. 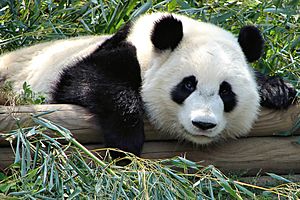 One of three giant pandas at the Atlanta Zoo 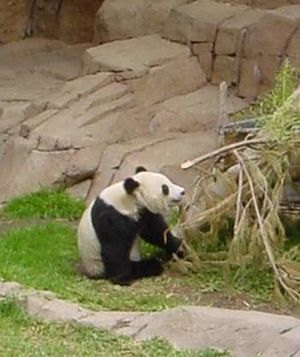 Hua Mei, the baby panda born at the San Diego Zoo in 1999

14 cities outside China have zoos with giant pandas. 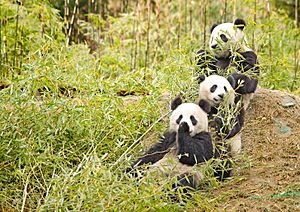 The giant panda is an endangered species. It may become extinct. In 2013, it was estimated that there were less than 2,500 mature giant pandas living in the wild. Illegal hunting is no longer a problem. Hunting for pandas is a crime. The penalties are harsh if you hunt pandas.

The greatest threat to survival is the loss of living areas. People are ruining the areas where pandas live. They are cutting down trees. They are building farms. Groups of pandas are forced to live in small areas. They are isolated. They cannot mix other panda groups.

Giant pandas eat bamboo. Sometimes the bamboo dies off. At one time, pandas could move to an area where bamboo was still growing. Moving has become more and more difficult. People are living and working in panda areas. Pandas cannot move about as freely as they once did.

All content from Kiddle encyclopedia articles (including the article images and facts) can be freely used under Attribution-ShareAlike license, unless stated otherwise. Cite this article:
Giant panda Facts for Kids. Kiddle Encyclopedia.