The red panda (Ailurus fulgens) is a mammal native to the eastern Himalayas and southwestern China. It is also called the lesser panda, the red bear-cat, and the red cat-bear.

It is listed as Endangered on the IUCN Red List because the wild population is estimated at fewer than 10,000 mature individuals and continues to decline due to habitat loss and fragmentation and poaching.

The red panda is the only living species of the Ailuridae family.

Red pandas are popular at Japanese zoos. They are called レッサーパンダ in Japan and 小熊貓 (xiǎo xìong māo ) in China, both literally translating to English as "small bear cat". They have become popular for how they look.

The red panda is not closely related to the giant panda: they are in different families, but share a vegetarian diet. They have both adapted to eating plant material, which is unusual for members of the Carnivora.

The red panda lives in the southern part of China, Sikkim, Nepal, and the Himalaya mountains in high trees. In the Indian kingdom of Sikkim it is the state animal. As an endangered species it is protected by laws in the countries where it lives. 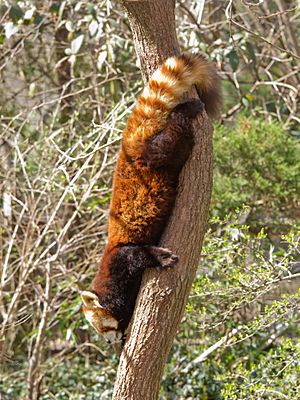 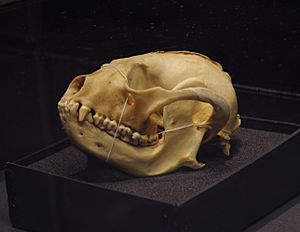 They have long, soft, reddish-brown fur on the upper parts, blackish fur on the lower parts, and a light face with tear markings and robust cranio-dental features.

The light face has white badges similar to those of a raccoon, but each individual can have distinctive markings. Their roundish heads have medium-sized upright ears, black noses, and blackish eyes.

Their long, bushy tails with six alternating transverse ochre rings provide balance and excellent camouflage against their habitat of moss- and lichen-covered trees.

The legs are black and short with thick fur on the soles of the paws. This fur serves as thermal insulation on snow-covered or icy surfaces and conceals scent glands, which are also present on the anus.

The red panda is specialized as a bamboo feeder with strong, curved and sharp semi-retractile claws standing inward for grasping narrow tree branches, leaves, and fruit. Like the giant panda, it has a "false thumb", which is an extension of the wrist bone. When descending a tree head-first, the red panda rotates its ankle to control its descent, one of the few climbing species to do so. 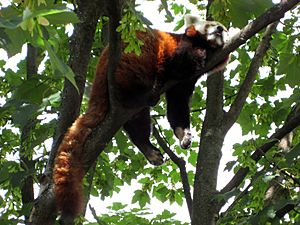 A red panda sleeping on a tree.

The red panda is endemic to the temperate forests of the Himalayas, and ranges from the foothills of western Nepal to China in the east.

The red panda lives between 2,200 and 4,800 m (7,200 and 15,700 ft) altitude, inhabiting areas of moderate temperature between 10 and 25 °C (50 and 77 °F) with little annual change. It prefers mountainous mixed deciduous and conifer forests, especially with old trees and dense understories of bamboo. 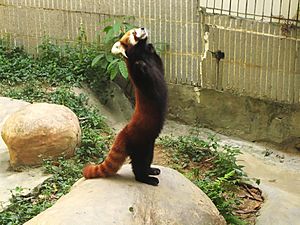 A red panda standing on a stone

The red panda is territorial and it is solitary except during mating season.

The species is generally quiet except for some twittering, tweeting, and whistling communication sounds. The also communicate by spraying trees and bushes with urine.

It has been reported to be both nocturnal and crepuscular, sleeping on tree branches or in tree hollows during the day and increasing its activity in the late afternoon and early evening hours. It sleeps stretched out on a branch with legs dangling when it is hot, and curled up with its tail over the face when it is cold.

Predators of the red panda include the snow leopard, mustelids, and humans. If they feel threatened or sense danger, they may try to escape by climbing a rock column or tree. If they can no longer flee, they stand on their hind legs to make themselves appear larger and use the sharp claws on their front paws to defend themselves.

A red panda, Futa, became a visitor attraction in Japan for his ability to stand upright for ten seconds at a time. 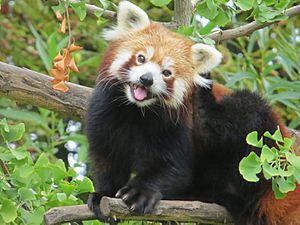 A red panda on a ginkgo tree 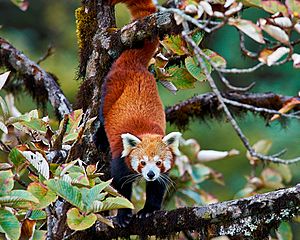 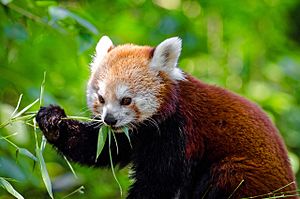 Red pandas are excellent climbers, and forage largely in trees. They eat mostly bamboo, and may eat small mammals, birds, eggs, flowers, and berries. In captivity, they were observed to eat birds, flowers, maple and mulberry leaves, and bark and fruits of maple, beech, and mulberry.

Like the giant panda, they cannot digest cellulose, so they must consume a large volume of bamboo to survive. Their diets consist of about two-thirds bamboo, but they also eat mushrooms, roots, acorns, lichens, and grasses. Occasionally, they supplement their diets with fish and insects.

They do little more than eat and sleep due to their low-calorie diets. 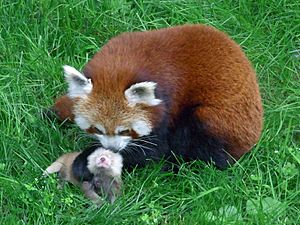 A red panda tending its cub

Red pandas are able to reproduce at around 18 months of age, and are fully mature at two to three years. Adults rarely interact in the wild except to find a mate.

A few days before birth, females begin to collect material, such as brushwood, grass, and leaves, to build a nest, which is normally located in a hollow tree or a rock crevice. After a gestation period of 112 to 158 days, the female gives birth in mid-June to late July to one to four (usually 1–2) blind and deaf cubs weighing 110 to 130 g (3.9 to 4.6 oz) each.

After birth, the mother cleans the cubs, and can then recognize each by its smell. The cubs start to open their eyes at about 18 days of age. By about 90 days, they achieve full adult fur and coloring, and begin to venture out of the nest. They also start eating solid foods at this point, weaning at around six to eight months of age. The cubs stay with their mother until the next litter is born in the following summer. Males rarely help raise the young, and only if they live in pairs or in small groups.

A red panda's average lifespan is between eight and 10 years, but individuals have been known to reach 15 years. 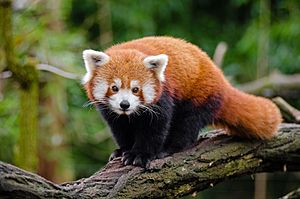 Closeup look of a red panda 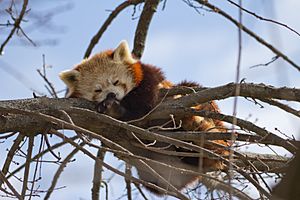 A red panda resting on a tree

The red panda is listed as endangered on the IUCN Red List since 2008 because the global population is estimated at about 10,000 individuals, with a decreasing population trend; only about half of the total area of potential habitat of 142,000 km2 (55,000 sq mi) is actually being used by the species.

It is protected in all range countries, and hunting is illegal.

All content from Kiddle encyclopedia articles (including the article images and facts) can be freely used under Attribution-ShareAlike license, unless stated otherwise. Cite this article:
Red panda Facts for Kids. Kiddle Encyclopedia.