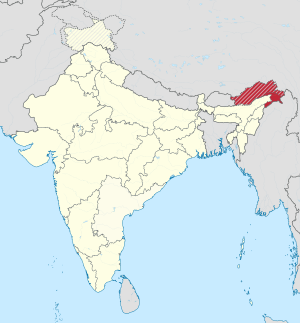 Arunachal Pradesh or South Tibet is a state between India and China. The country that owns this region is disputed. China says that they own it and call it South Tibet (Zangnan 藏南). In 2017, China started renaming places in this territory. In 2019 China destroyed 30,000 "incorrect" world maps that showed South Tibet as part of India.

The territory's northern boundary is about 550 miles long. It is known as the McMahon Line.

It is part of the border dispute between India and China. There is another dispute to the northwest in Aksai Chin (also with Pakistan).

In 1962, the Sino-Indian War was fought here. The war was short and ended in India's defeat. However, China withdrew back to the modern borders voluntarily. They still say that they own the region.

Most of the population look East Asian. The people look like their neighbors in Tibet and the Myanmar hill region.

All content from Kiddle encyclopedia articles (including the article images and facts) can be freely used under Attribution-ShareAlike license, unless stated otherwise. Cite this article:
Arunachal Pradesh Facts for Kids. Kiddle Encyclopedia.